Crossing the Continent, Stepping into Civilization

In Istanbul, the only city in the world that stretches across two continents.

Information at Grand Sagcanlar Hotel was very easy. I meant to ask the front desk staff which of the places mentioned on my voucher was closest to the hotel. But just by placing the printed voucher from Viator on his desk, he immediately answered,

"This bus leaves from Topkapi, in front of Hagia Sophia."

"There are several places mentioned here."

"Yes, but Topkapi is the closest."

"Follow the main road down. Go straight until you meet a tram station. Don't cross the street. Get on the tram, and Topkopi is at the next next stop. So one stop, and then another stop."

"So Topkapi is at the second stop?"

"And then from there, where should I go?"

"You can see the Blue Mosque from there. Just follow that direction."

"Okay, thank you. Can I exchange Euro here?"

"There's a money changer down the road. You can exchange there."

"You can, but the rate here is no good. It's better to exchange at the money changer."

I call this easy information? Definitely, yes -- compared with China. Please note that from now onwards, every time I describe a dialogue in English, it actually was in English for I know zero Turkish. In China, everything I held, everything I mentioned, seemed like something alien -- even my passport. Therefore I was surprised when this front desk staff, without looking any further, understood immediately the Istanbul City Hop-on Hop-off Bus I was about to ask him. It was so good to be true that I headed out the hotel preparing myself to get lost. He must have been pretending to know, I warned myself.

As I stepped out Grand Sagcanlar Hotel, I was like... wow... am I awake? Is this true? It's so Western. It's so movie-like. Yes, I do dream a lot. But I didn't actually believe that one day I would be standing on a setting I had only seen in movies. Thank you, Jesus!! Thank you so much!!

I followed the main road, ignored the alleyways on my side, and walked down the road. Money changer!! When you've just been from China, a money changer is a miracle. Unlike my changing US dollars in Korla, my changing Euro into Turkish Lira took less than three minutes. Done, without any 'help' of Peng Li.

I saw buses stopping in front of the money changer. Maybe this is what was meant by a tram, I thought. But I wasn't told of which number whilst these buses have numbers. "Topkapi?" I asked the driver.

He looked at me strangely and shook his head.

Maybe the other bus, I thought.

"Excuse me. Is this going to Topkapi?"

I was stared at even in a stranger look.

I went back to the money changer and asked the friendly clerk lady, "Excuse me. Do you know where the tram to Topkapi stops?"

"Sorry, sorry..." she waved her palm left and right but still smiling. Oh. Presumably the English she knows is limited to numbers.

I continued walking down the road. Just a few steps away... another money changer! Fantastic!

At the end of the road... there! A tram stop, very similar to the one I saw in Urumqi. 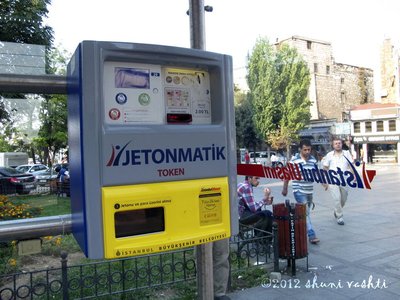 I examined people buying their ticket. Hmmm, it looks not so complicated. After I thought I could master the system, I walked to an empty booth. But, ops! Turkish!

Wait, wait a minute! Stay calm. I took a deep breath and a closer look. Oh. 'English'. Yay! English, how I miss you!

Done. I got my token. Luckily I had been on trains in Bangkok and Kuala Lumpur. Otherwise I wouldn't understand what I was supposed to do with that plastic round coin which looked like toy money. In my hometown, the capital city you know, still uses paper. Aye. But still, we have tons of money changers and ATMs. Aye.

As I took a picture of this token booth, someone who had just got his token from another booth and was about to walk to the tram, stopped and turned his head back at me. Like in comics, I could see a big question mark above his head. Hahaha. Maklum, Pak, orang kampung. Pardon me, Sir, I'm a villager. 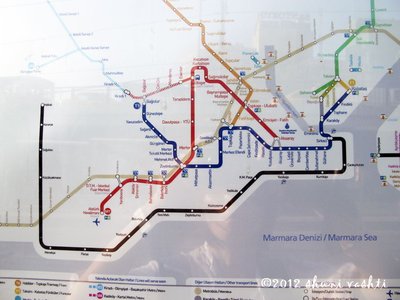 This is the route map. So easy to understand, even without understanding Turkish. It would be more complicated, if you are color blind, I guess.

As instructed, I got off at the second stop. I believe, all the way on the tram my mouth was half opened and my slanting eyes were wide opened.

My hotel's front desk staff had not fooled me even a bit. Right there I saw what I've seen in blogs and travel guides, the Blue Mosque soaring above between rooftops. And sure enough, the park which he told me about, was also there just a hundred, two, meters away.

There's the bus, too. A bright yellow double-decker bus with colorful pictures, undoubtedly a tourist bus. It doesn't look like Viator's Hop-on Hop-off buses I used to know, though. Ah, maybe color changes over the continent, I assured myself.

"Is this the bus?" I handed my voucher to a man standing beside the yellow bus.

See? I turned to myself. In Kuala Lumpur and Singapore it's red. In Istanbul it becomes yellow.

There were no other passenger. A man was busy vacuuming the bus inside. I got off and decided to wait outside.

A few minutes later the man I talked to just now, came back to me. "You want to join this bus?"

What a weird question, I thought. What does he think I am here for? "Yes, I do."

I don't remember exactly the sum he mentioned. I was shock.

"I have paid already!" I moved my Viator voucher forward.

"No, you pay here," the man repeated.

This must a mistake! I'm very sure my card has been credited by Viator. What was that money for? I regretted I didn't buy a local SIM Card near the money changer just now. Viator has given a local contact number. But, how much more am I going to spend on phone calls if I have to make another call to a local number using my Indonesian number?

I walked away from the yellow bus depressed. Last night and this morning, was the hotel. Now, it's the bus. Am I not supposed to come to Turkey?

Suddenly I heard a voice behind me. "Can I help you?"

He was a black guy. An African, maybe. Ah, what is it again now? What does he want? I increased my steps faster.

Is this black guy following me? What should I do? Run? To which direction? This is a park. He can easily catch me.

Aaargh. Que sera que sera. By now he was already standing next to me. I showed him my Viator voucher.

"I have already paid for this ticket. But just now the man from the bus said I have to pay again."

"I don't know about this bus. But there are two tourist buses here. Maybe yours is the other one," explained Mr. Black.

"It's over there. Just walk straight from here."

How ashamed I felt about myself. 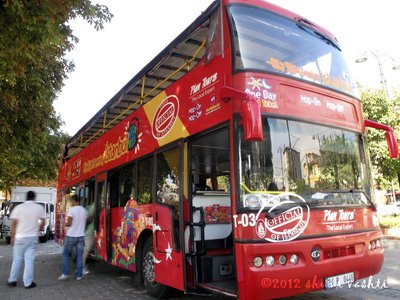 At the other side of the park, there stood the familiar red Hop-on Hop-off bus from Viator. Exactly like the ones in Singapore and Kuala Lumpur. The color hasn't changed. Not even the pictures.

Because the bus was yet to leave in 45 minutes, I went off to explore the park. I bought a bottle of cold mineral water and was tempted by the bread vendor. But I strengthened myself not to buy. My day in Turkey has just started. I must be careful with my spending. 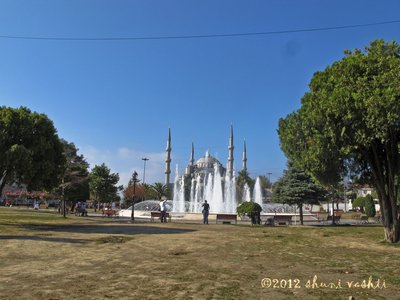 This is the park, part of it. That's the Blue Mosque in a distance. 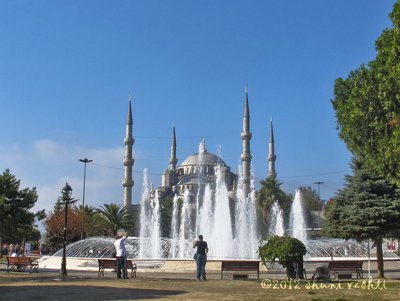 A little more close up is this. 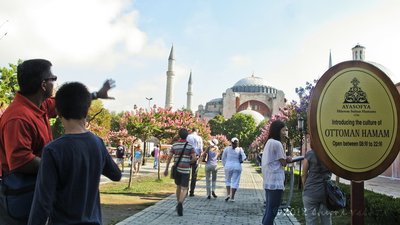 This is the entrance to Hagia Sophia. As I stood here, many times people asked me to take their picture. Most of them were tourists joining a group. Then came a couple. The guy directed me how he wanted their picture to appear. I tried my best to satisfy his request with his pocket camera that I wasn't familiar with at all.

By his looks, it was obvious that he wasn't satisfied with the result. "If you don't like it, let my do it again," I asked.

"Thank you. But we have to catch up!" And they both ran after a tourist group who was walking ahead. Ah... that's it when you join a tourist group. Your time is not yours, even just for a decent picture.

My bus was loaded with British tourists. I assume they were retired people enjoying life. Oh, how nice. They were loud and cheerful. As our bus moved, the began to put on their earphones, whereas the guy who gave me my ticket and booklet didn't give an earphone.

"Excuse me, where did you get the earphone?" I asked the lady who sat across me.

"It's buy the downstairs by the door," she answered.

"I'll get it for you," said a gentleman behind me. Of course I felt uneasy letting him go downstairs just to get a pair of earphones.

"Errr... it's okay. Would you just look after my seat, please?" I was so reluctant to loose my best seat which was on the window side and not blocked by a pole. But should I bring my camera backpack with downstairs or not? These guys look kind, but... who knows?

As I was contemplating on whether to or not, the lady across me signaled me to sit down. "Patient, patient," she said.

Oh! Was I looking panic?

That lady looked at me while stretching her hand to the lady sitting across her. And then,

"Here you go!" she handed me a pair of earphones from her friend.

"Aren't you going to need this, too?" 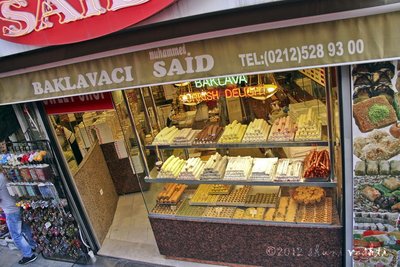 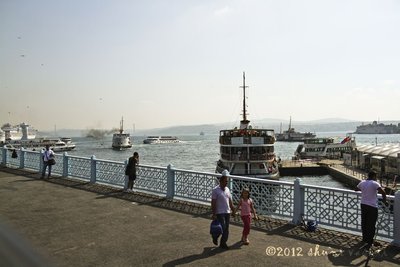 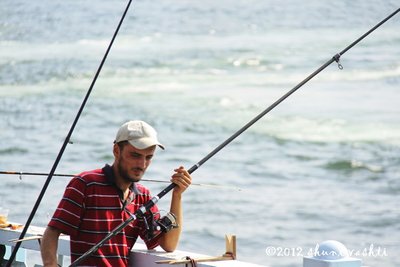 People were fishing along the bridge that crossed the bosphorus. I wonder how the fishes look? Eurasian? 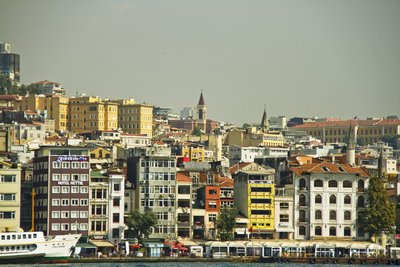 Where am I? I am in Europe!! How do Europeans feel when they step on Asia or Africa for the first time? Oh, they must feel sorry for themselves because they feel going backwards. No?

I thought I would get off at any stop when anyone on deck gets off. Nobody did! They just stayed loud and cheerful. At one time pointing out at what they saw, at another time teasing one another. Oh my... are these Englishmen and English women going to stay on the bus until they reach back in Topkapi? What a waste of the ticket! That's not hoppin on and hopping off. I got off at Taksim Square.

There... next to the bus terminal, ATM booths lined up. ATMs applicable for Cirrus, Alto.. and anything. Peng Li, Peng Li, nǐ kàn! Sorry to say, I felt like I had just entered civilization.