I've stopped counting of how many. This is my story.

It felt more like a home cave than a restaurant. Impressive architecture, romantic environment. Seyyah Han was the name. Meal exclude drink was already included in our tour fee. That contained a full bowl of fresh salad, Turkish Kebab, and a glass of ice cream. We had choices of chicken, beef, or lamb for kebab. I opted for chicken and no drink. Mineral water from my backpack is enough. Economical and healthy.

While waiting for our order, I went to the rest room. After that, because of the architect layout of the site, I couldn't immediately find where our dinning room was. Well, not because of the layout. It's my terrible sense of direction. Even in church, when I go to the rest room during the service, I would have to go through a moment of confusion to find where my seat row is.

Nevertheless, I had my pride. Instead of searching further, I peeped to the other dinning rooms. That's what I usually do when I get lost. I explore in the name of getting lost.

"Hey Madame! What do you want? Your room is over here," suddenly I heard our host's voice.

That sentence really made me feel bad. As if I had had evil intention in his house. Ugh.

When I returned to my table, salad was already served. Wow, these are the vegetables I like. I gobbled them up. This is my money.

My group was divided into two long tables. And we sat on a long bench. Somewhat like the Lord's table. On my table, it seemed that I was the only one who nearly finished the whole bowl of salad. The French couple who sat across me didn't finish even half of it.

While I was absorbed with salad, our host showed up again. "This is my kebab!" 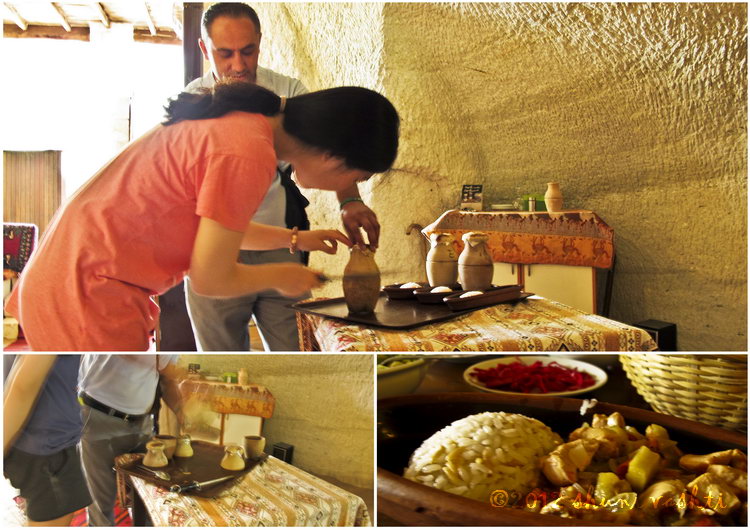 He presented to us the procession of Turkish Kebab which took me by surprise. My camera! I've returned my camera into my backpack and even if I took it out, there wouldn't be enough time, because the lens attached to it is a wide lens and I have to change it. I grabbed my G12, but no time to figure out the settings. I hope this will be clear enough for you to get the picture.

First, you hit the clay jug of kebab right on the line with a knife. And then the jug will break into two. Take off the upper part and pour the content on the dish. Three guests was asked to volunteer breaking the jug, each for the chicken, beef, and lamb kebab. The rest was done in the kitchen.

I see that Turkish people know how to celebrate food. The way they pour tea, coffee, the way they serve kebab, they don't just put it on the table and then done. They turn life special.

The upset feeling I had had, effected my meal not a bit. Yummy and free! Yay! I turned to the others. Are they on diet or is my taste that low? I guess they must have been saying to one another, "Look at that lady from Indonesia. What a poor country. Look how she eats! She is eating everything!"

Hey man, in Turkey (Note: only in Turkey.) I'm hungry every two hours. And yes, I'm not as wealthy as you all are. Therefore, when there's something free, and good, like this, I'll never forsake it!

When ice cream was served, some just got up, others took one two spoon and left. When I was in hectic finishing the two three last spoons of ice cream, everyone had already left the room. There, at the edge of the bench, I sat while holding my ice cream glass tight. Honestly, I still had enough capacity to finish the other forfeited glasses of ice cream on the table. 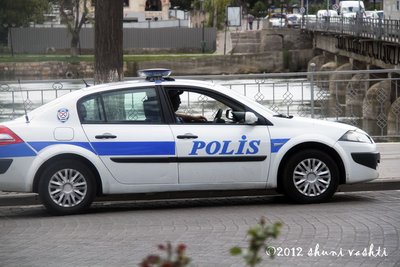 The host called the police!!

Hahaha... just kidding. I took this picture from inside our mini bus on the way to Avanos. Nothing special, I know. I'm just obsessed by photographing police cars, policemen, soldiers, immigration officers, and all those who always avoid being photographed and even get mad because of that. They should be proud of their job. They should be a little more narcissistic. They should not forbid me, because it temps me the more. Click! Gotcha. Polis. 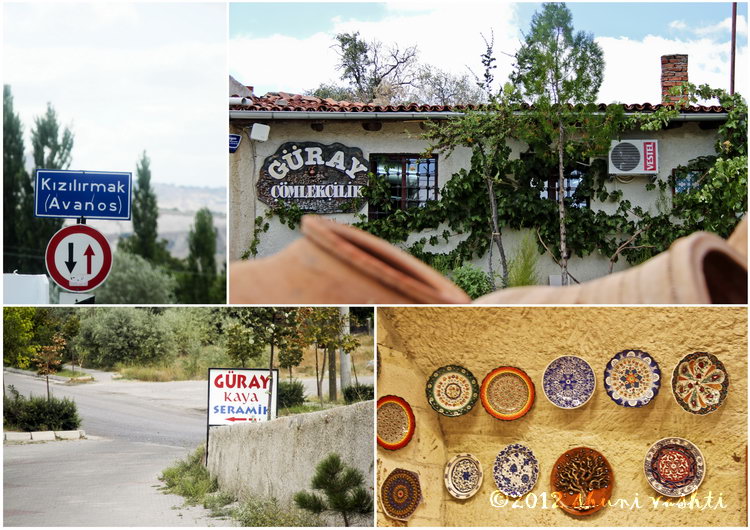 Guray Ceramic House is located in Avanos Pottery Village. This ceramic house has been going on since 5 generations, passing from father to son. 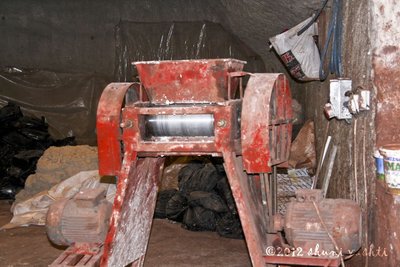 The red material comes from the river and the white material kaolin from volcanic mountain. Firstly, air bubble is sucked out and then wrapped in plastic. Secondly, comes fermentation. After fermentation, the red material is burned one time for 8 hours under 800 degrees. The white material is burned two times for 8 to 16 hours, because it is harder. Then comes the painting process. Painting done, burn again. 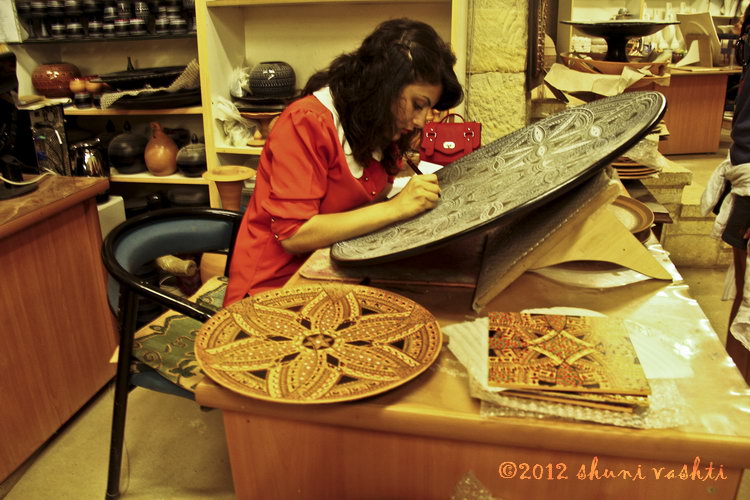 Click, and find out more! Explanation is in clear English. Don't worry.

It's a rather long footage. But, interesting. Find out!

This is my fellow Iraqi (Iranian? I don't remember exactly) tourist who volunteered trying to make pottery. She has been to Turkey four times. Wow. What did your friends say about that? Aha. Oh yeah, she confessed that she is a sculptor, which has somewhat a relationship with pottery. During the tour she showed keen interest in frescoes and our tour guide showed deep signs of interest in her. Aha.

So! We had had lunch from a clay jug. And then we went to the potter's workshop to witness the making of jugs and such. Now, have you watched my recordings above? What did he show us? Yup! A wine bottle. A bottle that's hung around one's shoulder. Let's look for wine, now! 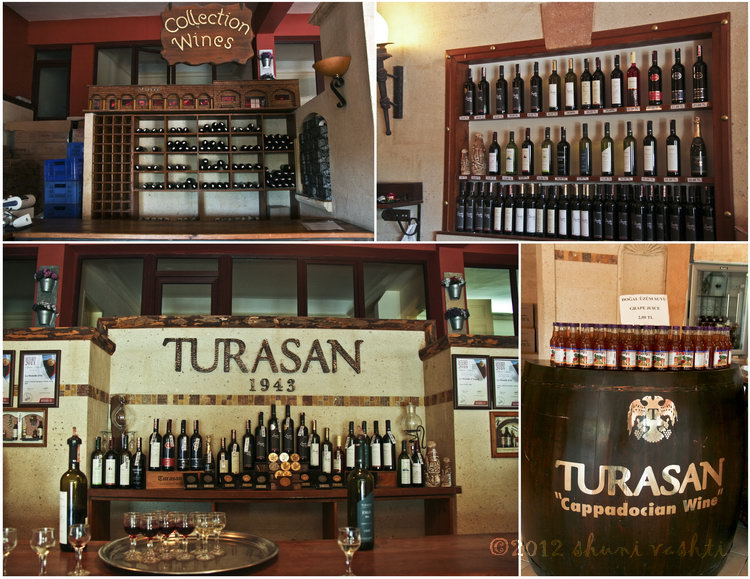 In Turasan Winery you get free wine. Aha. We didn't get to see the vineyard as I had in PB Valley (Thailand). After being at the ceramic house, I expected to get explanations about the process, also like I had had in Khao Yai. Nevertheless, of something far far away from homeland, this is something new anyway. It can be considered as the toppings of past experiences I in Khao Yai.

[I discovered that the 'about winery' is available on Turasan Winery's website -- in English.] 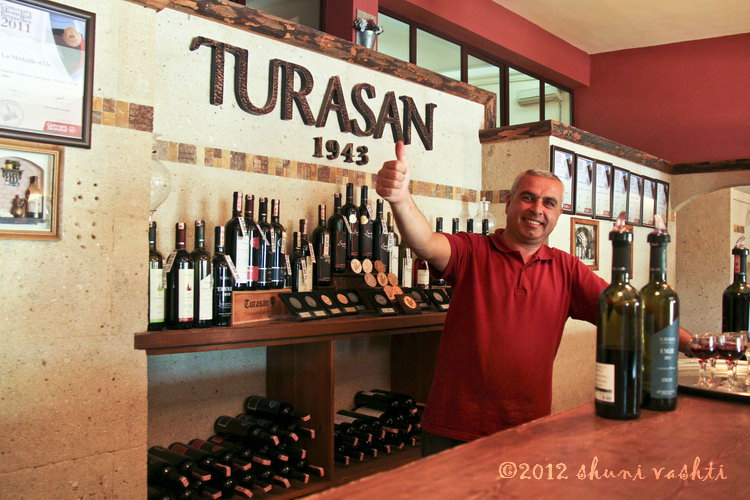 I am certain, he doesn't carry any police blood in his gene. Proudly and willingly, he made a pose for me that on the contrary I felt compelled to press my shutter button. Click. Teşekkürler. Don't ask me to pronounce that. 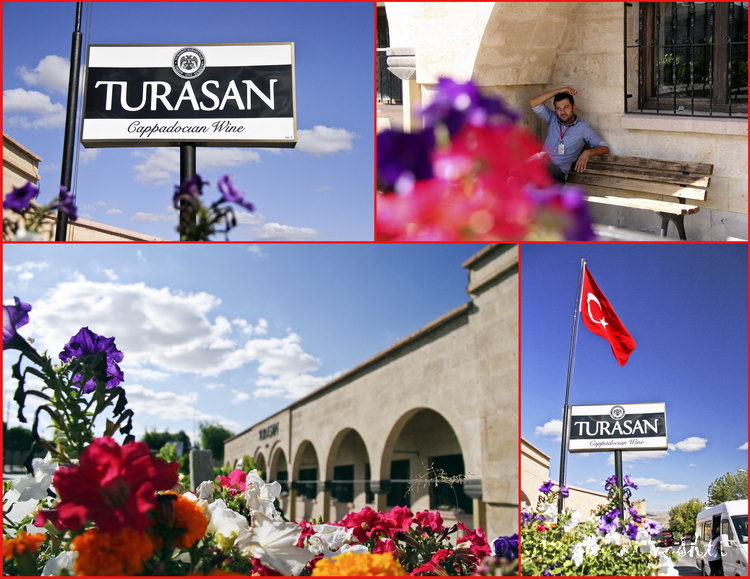 The beauty of summer is that the beauty is obvious to anyone: Deep blue sky and bright blooming flowers. On top right is our tour guide... dreaming of an Iraqi (or Iranian?) lady who proofs a natural artist... ooops. On bottom right, at the very corner, that's our mini tour bus. Yuuuhuuu... we are still on the move...! Coming along?