It has twelve different colours in the world and seven of them are from Cappadocia.

Since ever I started blogging, I've noticed that the stat of views for my videos doesn't even reach half of the pageviews of my blog posts. I could have been because my videoing skill is not even half my writing skill. Aye. However, I reckon the stat of views on YouTube doesn't care whether one watches the video through or not. Just one second of play would be counted as 1 view, so I assume. Therefore, it seem that people just don't click on my video links -- regardless of the quality.

I have a few guesses of what the reason might be, but of none I can be sure. Thus, on this post I'm including screenshots taken from the video I made at Ozler Factory. I just want to make sure that you don't miss anything you might actually have interest in. 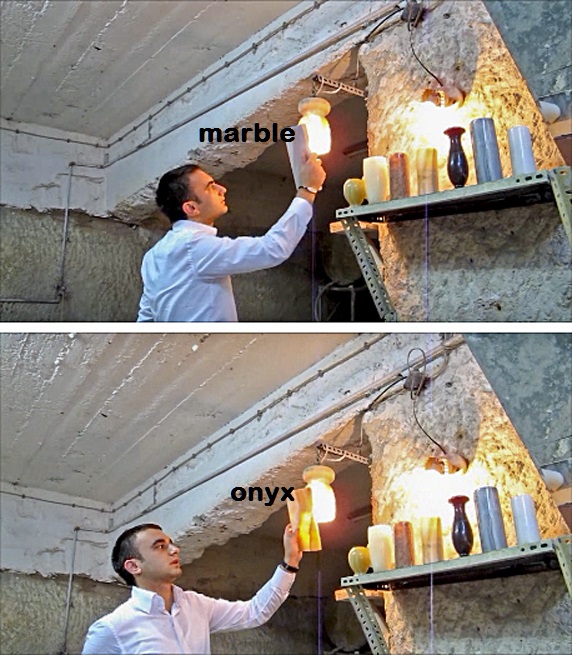 At the workshop we were explained about some differences between gemstones. Onyx, we were told, looks like marble. But, marble doesn't translucent to light as onyx do. Onyx is also harder than marble and it is actually one of the hardest (Mohs Scale: 7) stone in the world.

Speaking of translucency, my mind went back to Hetian where I saw nephrite, a variety of jade, translucent to the light of a flashlight. Hmmm, places along the Silk Road seem to share things in common, besides silk.

According to Wikipedia, onyx is a banded variety of chalcedony. The colors of its bands range from white to almost every color (save some shades, such as purple or blue). Commonly, specimens of onyx contain bands of black and/or white. 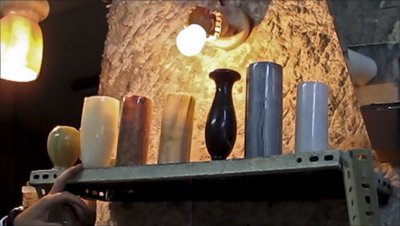 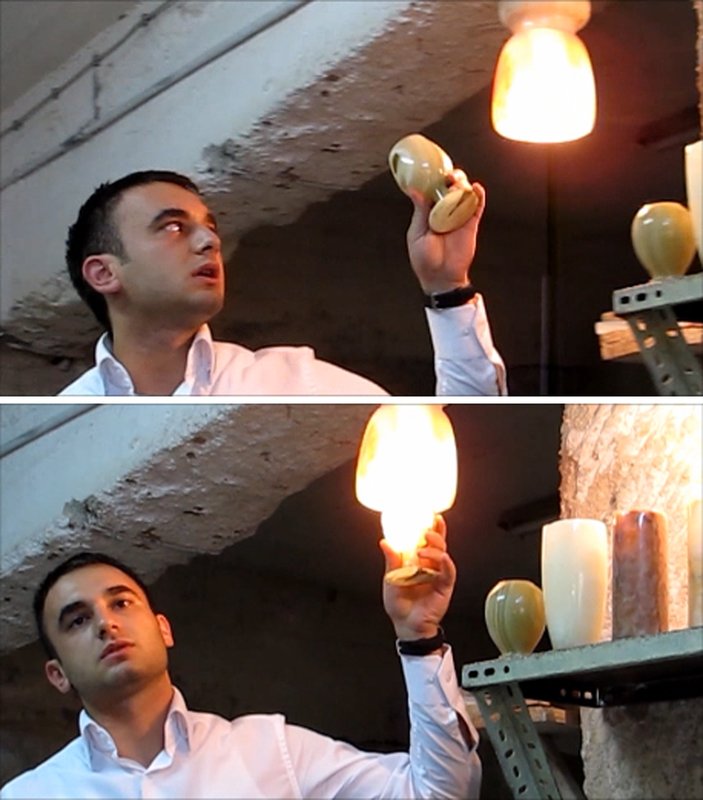 The best quality is the dark green one. Did I hear "green" ? Well, you watch the video yourself. It's rather confusing for me, because the piece he picked up doesn't look green to me. Anyway, he said that it's best quality, because it translucent more to light. Moreover, Acetes Travel also mentioned:

In Turkey, Cappadocia has the onyx mines where the highest quality onyx is found (brown-veined green onyx is the highest quality, followed by brown-veined beige). Local artisans are experts at making items of jewellery as well as beautiful vases, chess sets, and numerous other attractive artifacts and knick-knacks. Watch a demonstration of how this very hard and brittle stone is cut, shaped and polished, before seeing the many beautiful onyx products. 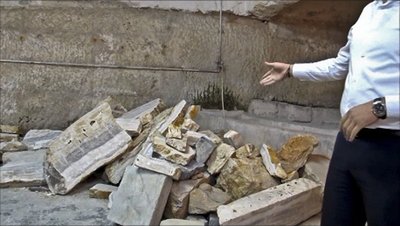 There are three basic steps in processing onyx. 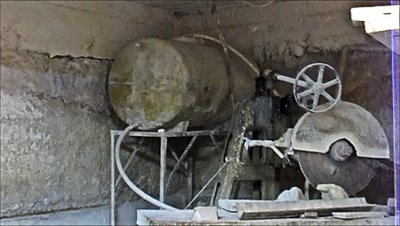 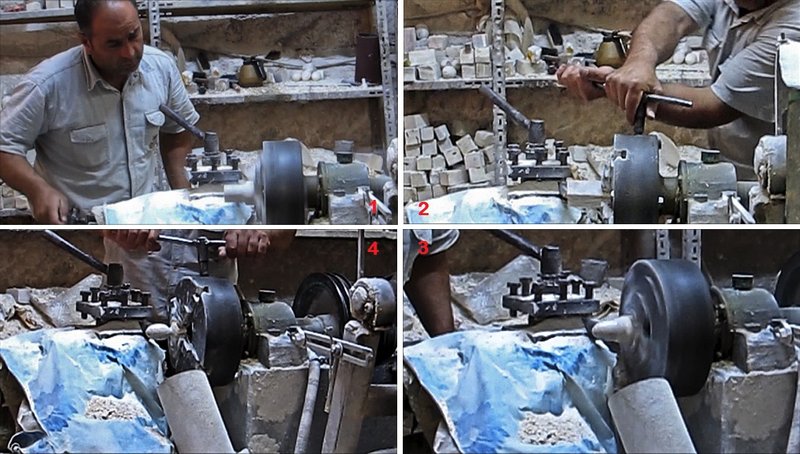 Next, the shaping process. Picture, from left to right, clockwise. 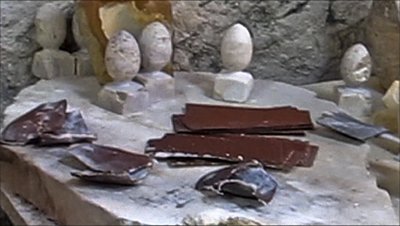 After shaping, refining follows using these brown sheets. I assume it's like sandpaper. 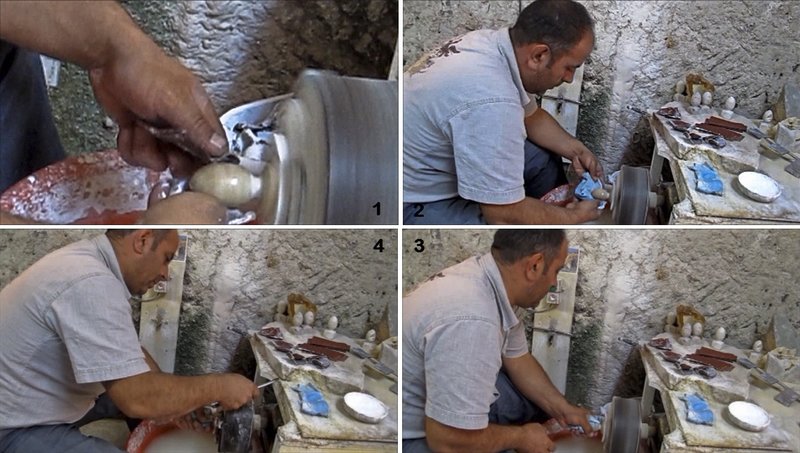 The final touch is polishing. Picture, from left to right, clockwise. 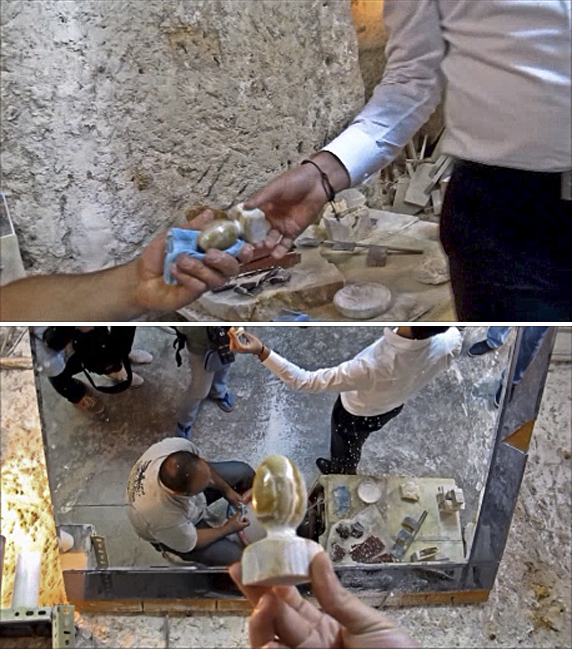