9 °C
View A Thread of Silk on automidori's travel map. 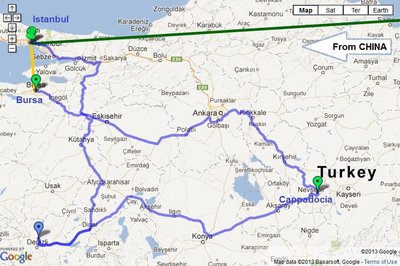 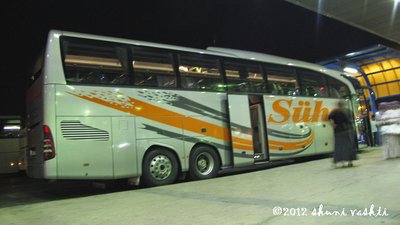 From Bursa to Cappadocia by bus takes about 10.5 hours. A travel agency I found on the internet said that the bus will make 2 stops. In reality, the bus made many, many, stops. Needless to mention, most passengers, including me, seized the opportunity to go to the rest room. This photo shot I made in the middle of the night when I was waken up by the engine that stopped. I got off and walked to the rest room sleepily. At the first stop, use of the toilet was free. But by the next stops, 1 lyra per person was acquired. Having that understood, I scheduled my pee.. pssttt. I should! Think about this, a bottle of mineral water cost 0.5 lyra. But using the toilet cost 1 lyra. Hence, throwing away is more expensive than filling in! Ridiculous.

Okay, let me describe the bus. The bus is... wow, like an airbus! Every seat is equipped with a television set. Several television channels and bunch of movies are provided in the set. No movie in English, though. The screen and sound were operating perfect, I checked. Under the television set is a table that can be pulled up and down.

Beverages are served at least twice during the whole journey. That, doesn't include mineral water. Mineral water is served on a different schedule. Beverages are served with a cart which is pushed along the corridor, exactly like on an airplane. Pardon me for being over-specific on this. It was my first experience.

For the love of coffee, I'm always quick to learn what 'coffee' is in any language. Fortunately, 'coffee' seems to sound alike all over the world. (As if I have traveled all over the world.) In Turkish, 'coffee' is 'kahve'. But more surprisingly it is, 'tea' is 'çay'!! Doesn't that sound Chinese?? The Silk Road is absolutely fascinating. Who introduced tea to Turkey? You don't need to stay long in Turkey to discover that Turkey is obsessed by tea.

So, when the bus attendant brought in coffee and tea, I said.... I said, "No, thank you." I don't want to spend any extra money, you know.

To my embarrassment, the bus attendant replied, "Free."

"Ah... cha..." I murmured. My pronunciation most likely had been incorrect, but the bus attendant must understand.

I chose tea over coffee, because I thought there would be only 2 stops along the way and I was worried that if I drank coffee, the urge to pee would come too strong.

Then, the bus attendant brought a kettle of hot water and filled the passengers' paper cup, including mine. I hadn't finished being amazed for the free coffee when the beverage cart came back rolling down my way filled with boxes of juice! Oh, had I known, I would have chose juice instead of tea. I don't quite like tea except when it's green. And you what, I'm such a naif girl. I thought I had already gotten my share, although I regretted my choice, so I let the handsome bus attendant pass me with his cart. But then the guy behind me who I noticed had taken coffee before, also asked for a glass of juice. No wonder when the bus attendant wanted to fill his cup with hot water, he refused. Aye! Once again, had I known! Of course I was too shy to call the bus attendant and ask for a glass of juice. Well... even if I weren't, I didn't know how to say it in Turkish anyway.

I almost got chocked with my hot tea when the beverage cart came back rolling down the corridor, this time filled with soft drinks! I could hear ice cubes rattling in a glass jar. Fantastic, Turkey! The bus fare was only 50 TL. I felt like I didn't deserve that much luxury.

And then... the lights went out. I, slept like a (rich) baby, until the bus stopped at first stopover and the lights were on again. Other than going to the toilet, I didn't dare to explore the vicinity as I use to do, because I was worried being left by the bus. Every now and then I heard loud announcements through the speakers. But how would I know when it's my bus being mentioned? I only understand 'kahve' and 'çay'.

My bus started to move. The lights were still on. Ah... the handsome bus attendant is coming my way... He offered mineral water. Free. Oh, so after throwing away, you get a replacement. Great.

I don't remember exactly when to my great delight, the beverage cart rolled back my way. This time it didn't start with coffee and tea, but just juice. Impatiently, I asked for a glass of it. Unbelievable! I don't know what fruit it was. But that was the best juice I had ever had the whole my life, all around the world.

Yup, the bus attendant, although spoke very little English, was handsome and charming, was like a film star. I tell you, 10 hours on a Chinese train far equals 10 hours on Turkish bus. 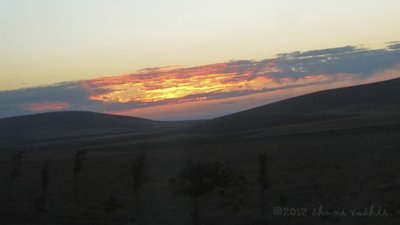 Good morning, Madame!! Wow. I gasped. The dessert! A silent longing for China suddenly crept inside me. It hasn't been a week yet, but in spite of the uncivilized life where no one speaks English, where ATM machine is a luxury, where money changer is a foreign agent, I began to miss that all. I missed Xinjiang and the desert. The sunrise didn't appear exactly at my window, but the desert ran along with me side by side. My mind wandered. Did the ancient Silk Road travelers ride this desert on their camels? They must haven't been able to imagine a bus, as luxurious as mine, rolling alongside like now.

The weather temperature display above the driver's seat said it was 9 Celsius degree outside. It had been 5. I got worried I wouldn't be able to make it through as I didn't prepare any winter clothes except for a jacket. 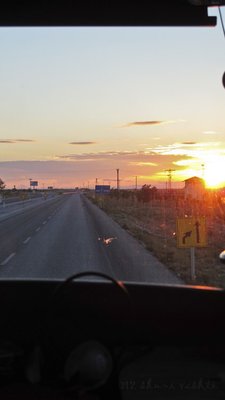 We passed by a road sign and it said "Yenice". At first I thought it was "Venice". 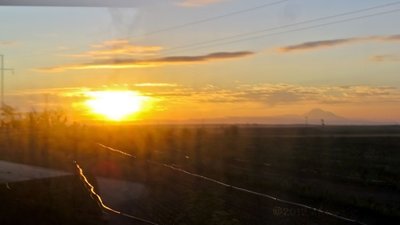 At the end of the bus ride, I learned that coffee and tea is only served once, but juice will come out most frequent. Also that it is okay to drink coffee, because the bus will make frequent stops anyway.