With each stone laid upon, with each step camel made, history unknowingly was written.

27 °C
View A Thread of Silk on automidori's travel map. 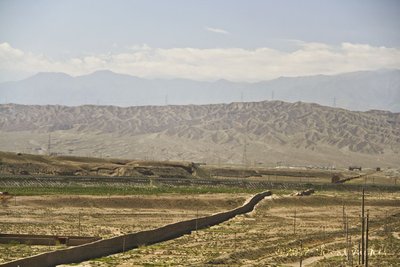 As I stood on the wall and cast my view into the desert afar, under this hot air, in my mind I saw camels moving gorgeously into the wind-blown sand. How long have they been on the road? A month? A year? Where have they been? Turkey? Iran? Afghanistan? What do they bring? What do they expect for? Hadn't it been for something truly precious, they wouldn't have gone through such a journey. Even now, as the sun goes higher and higher, I can feel how the heat is wearing me off. And yet, I had had a good night sleep in a cozy bed and woke up for a true breakfast. But how about the traders and the holy-men in those days? How did they spend the night? What did they have for breakfast? If it hadn't been in the name of silk...

My eyes followed the wall far into the desert. Why did those people care to endure the hardship building walls on a land that can be unforgiving hot just after being unforgiving cold? Let alone carrying a brick, my backpack was like dragging me down. Then I heard horse tramps marching from Mongolia into the desert. The people on the land I'm standing on now got frantic. A guard was stationed at every post, the watchtower never fell asleep. Why did they care so much to break into the desert of Gobi? If it hadn't been for something truly valued... 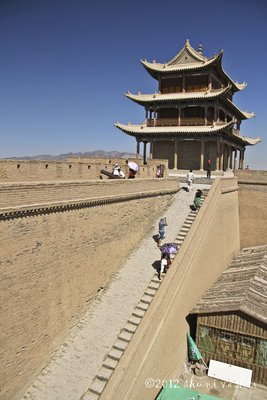 Remember this picture in previous post? Next to the stairs is what's called "Riding Track".

That's about the riding track. Herewith I copy the English version:
"Famous for soldiers riding horse to city, the Riding Track functioned to carry armed forces, army provisions and weapons. It is close to the wall of city and reaches to the roof angled at 230. The Riding track is 3m wie and 22m long, paved with black bricks and arranged battlements outboardl If invaded, the Riding Track could be the channel of rolling logs, stones for defense and tackle, which would hit enemies badly. Now stairs are laid for protecting the Riding Track and facilitating tourists." 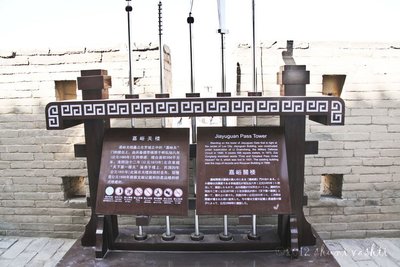 "Standing on the tower of Jiayuguan Gate that is right at the center of Luo City, Jiayuguan Building, was constructed under supervision of Li Duancheng, the Military Defense Circuit in 1495. It covers 556 square meters. In 1873, Zuo Zongtang inscribed words "First and Greatest Pass Under Heaven" for it, which was lost in 1931. The exisiting building was the copy of records and Rouyuan Building in 1988." 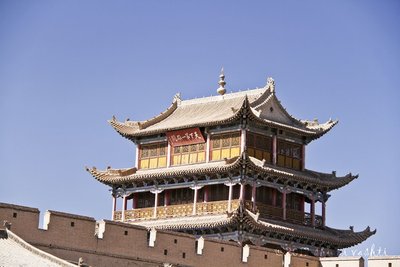 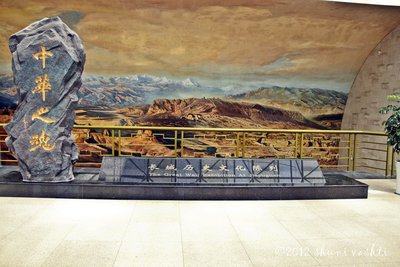 Inside the museum I learned various interesting things, such as: (I copy again.)
Jiayuguan, the Impregnable Pass in the West
"Between the snows capped Qilian Mountains and the black mountains of Hishan lies the narrow canyon that we call jiayu. It is bordered by the craggy twin peaks of thse mountain ranges to the north and the spring lake of Yuquan to the south. From ancient times it has been a hub of communication between China and the West, and is the divide between the oasis and the Gobi desert. At the beginning of the Ming Dynasty a fortress was set up on the Jiayu Mountains. The Qing Dynasty added administrative posts and this became the western end of the 10,000 - mile long Great Wall of China. This most magnificent fortified pass was put under State protection in 1961 and listed in the Cultural Relics Commissions first published list of monuments under State protection. In 1965 the city of Jiayuguan was established as a municipality and in 1978 it was put on the first list of cities opened to foreigners. Today jiayuguan has become one of the foremost tourist sites in northwest China, attracting large numbers of foreigners and visitors." 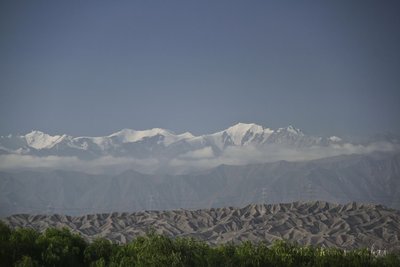 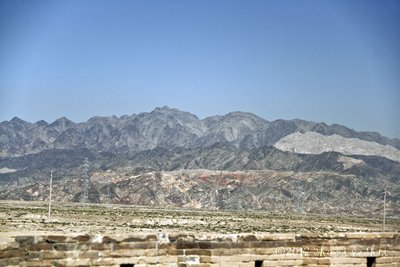 And this is the black mountains of Hishan.

(Still copying from the information board.)
Trade on the Silk Road
"Hexi's commercial economy had been very prosperous for about a thousand years between the Han and Tang dynasties. A medley of foreign or Chinese merchants with their caravans and merchandise traveled to Hexi for commercial exchange. With the import of the foreign exotic merchandise and the export of silk increased, the market was enlarged increasingly. In the Sui-Tang periods Guzang (modern Wuwei) was the richest area where market was active and Zhangye attracted many merchants from kingdoms in the West Regions. And Hexi became one of the most active areas of Chinese foreign trade." 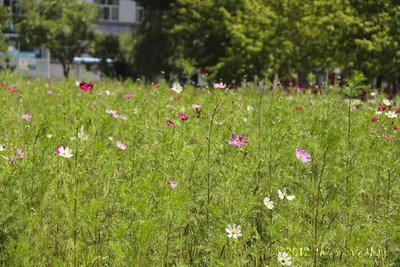 At the parking lot, Jiayuguan did not cease to fascinate me. These are wild flowers that seem to grow just for the sake of growing, next to the parking lot. For some, this might be of little significance. But for me, it was amazing. In my country, one would have to spend money to buy the flowers, work the soil, plant the flowers, tend to them... and so on. Here, it's just like gold scattered on the ground. 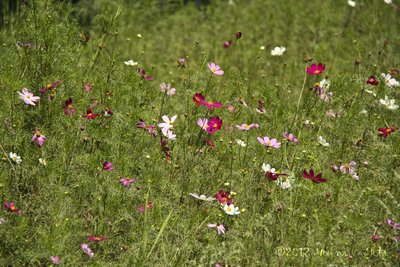 A little more close up of the flowers.

As I write these two posts, the more I come to realize that there are still a lot of things I should learn about Jiayuguan. Plus, there are still some scenes I haven't put into frame. May I have another chance to make a better picture of Jiayuguan.