Xi'An, the Ancient Side

As far as Islam spreaded from Arab to Xi'An lies the history of China carried through the Silk Road.

34 °C
View A Thread of Silk on automidori's travel map.

Quoting from Insight Guides: Silk Road
"Xi'An served as China's capital for more than a thousand years, most notably under the illustrious Tang Dynasty (618-907). Named Chang'an at that time, Xi'An emerged as the largest and most culturally diverse city in the world, attracting businessmen, traders, artisans, courtesans, mendicants, holy men from all over Asia and beyond.

Xi'An lost its position of national prominence after the fall of the Tang Dynasty in 907, with subsequent imperial capitals moving to Kaifeng and, under the Mongols, to Dadu -- later renamed Beijing. 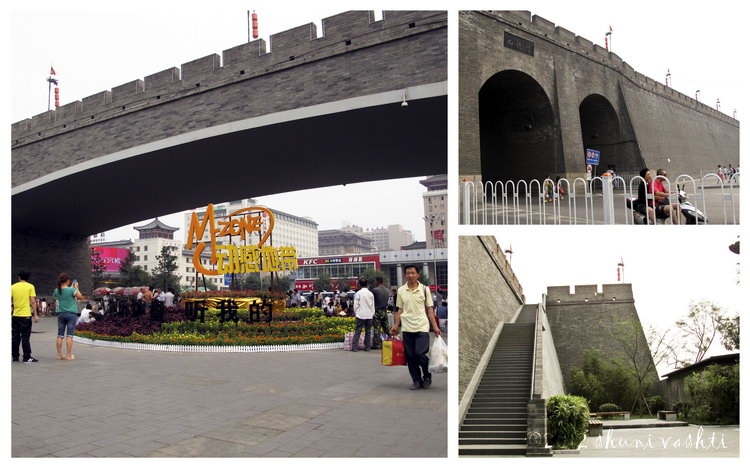 Xi'An prospered under the Ming Dynasty (1368-1644), when a new city wall was built by Emperor Hongwu in 1370. Tellingly, however, the new wall enclosed a much smaller city than the earlier Tang city at Chang'an.

Despite its former size and pedigree, Xi'An would remain something of a western outpost, removed from the power and influence of Beijing, until the completion of the strategic east-west Shanghai - Lanzhou Railway in the 1930s." 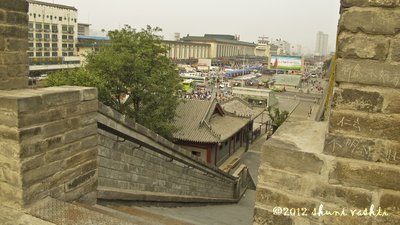 A little close up of the wall's material structure and overlooking Xi'an Railway Station below. 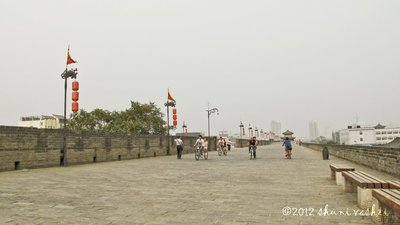 On the city wall of Xi'An I stand. Quoting from Insight Guides: Silk Road again
"... extend for more than 14 km, forming a rectangle aligned with the cardinal directions, and dominated -- as is usual in fortified Chinese cities -- by North, South, East, and West city gates. The walls are in truly remarkable condition -- the best and most complete medieval city wall anywhere in China, and quite possibly in the world." 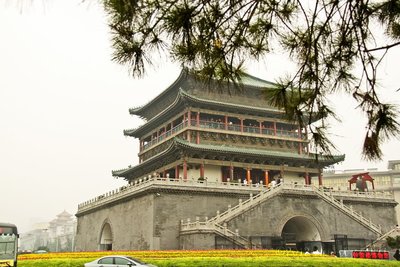 Here, the famous Bell Tower of Xi'An. If only the sky wasn't this pale... 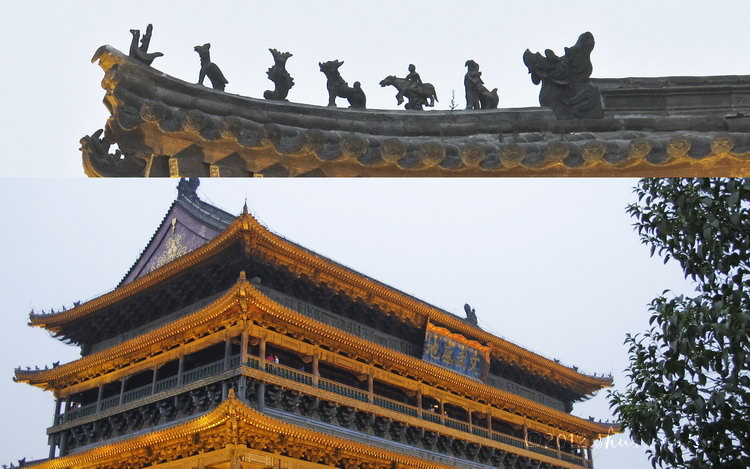 The other popular tower of Xi'An, Drum Tower. I didn't go up and picture the drums. Instead, inspired by a tourist advertisement nearby, I made a close up of the roof ornaments. I wonder whether there's a story of them. There must be... 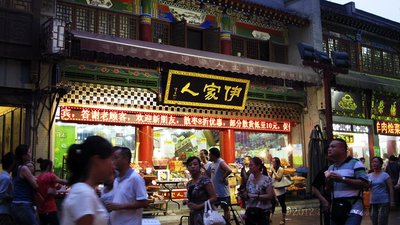 Behind Drum Tower lies the famous Moslem Street or 回民路 Huímín lù. The name derives from the ethnic group of Hui who are the Moslem Chinese. 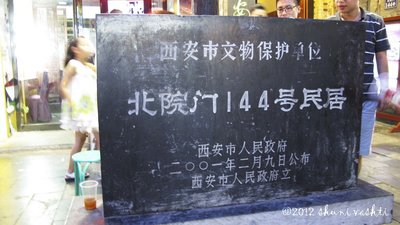 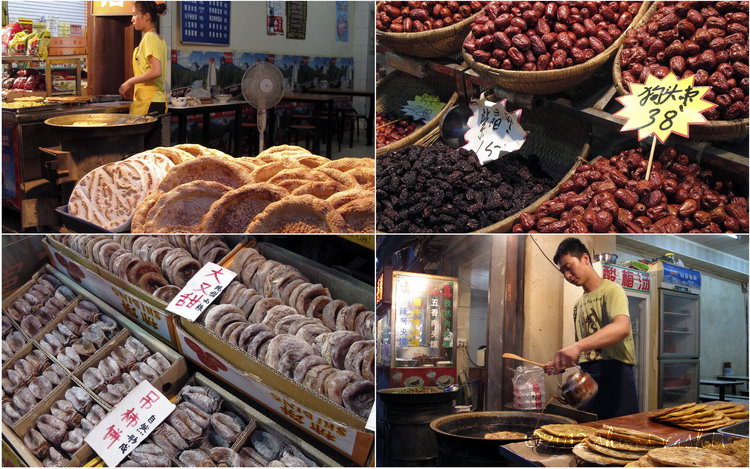 To me, Moslem Street looks like nothing but food. Everywhere is food! I bought the one on bottom right in this photo for 7 yuan. You can choose the fillings with your own choice. I kept it for breakfast in the train the next morning. However... uggghhh... I couldn't stand the smell!! The smell was so strong that even the rest was already in the waste bin several cabins away from me, I felt like someone tying the stuff with a thread and swinging it in front of my nose. I turn my head left, the smell goes left. I turn my head right, the smell goes right. Upon arriving at the hotel, I emptied my bag and hung it upside down to let the smell out. 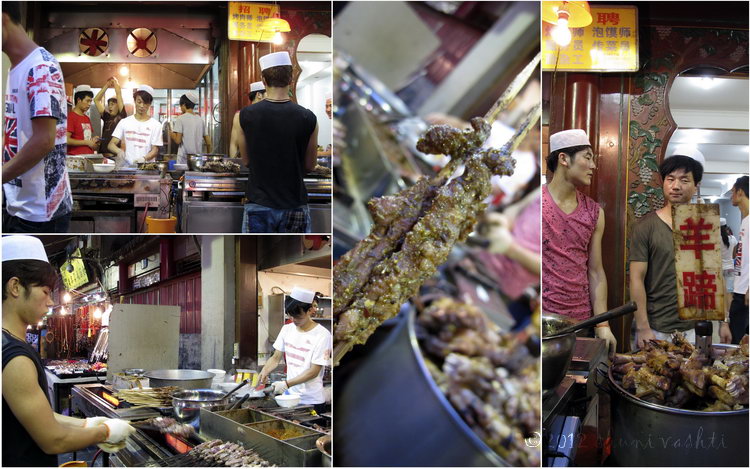 2 yuan per stick. Mutton.... nyaaammm! Forget my birthday, forget cholesterol. It has been 2 years since I quit this favorite delicacy of mine. I think I could finish 20 sticks of these in one sitting. The seasoning was so... unmentionable. 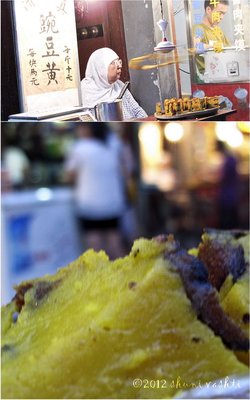 This cake was also yummy. Red beans and... sweet potato? 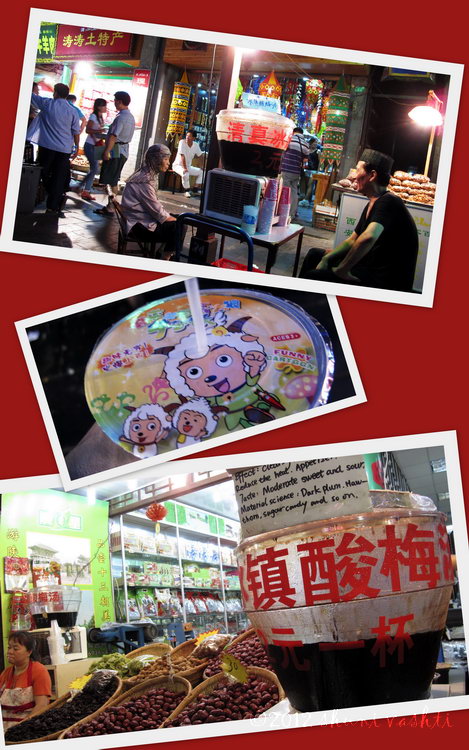 In this hot city, ice plum juice is certainly refreshing. I think I zipped the whole glass without taking a breath. 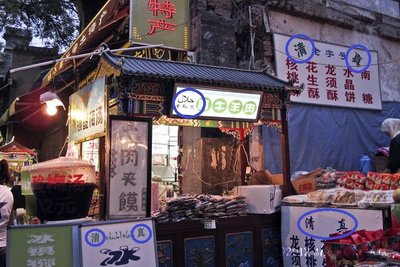 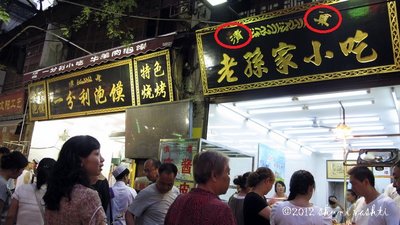 Also at this restaurant, 清真.

Luckily there was a public shower at my hostel. I returned to wash off all my sticky sweat and pick up my luggage. Then I took the public bus to get to the train station. 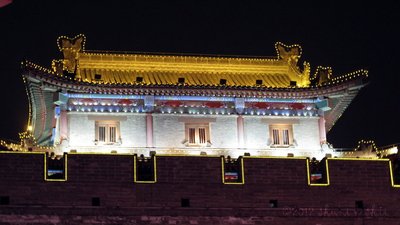 The view of the city wall at night across Xi'An Railway Station. 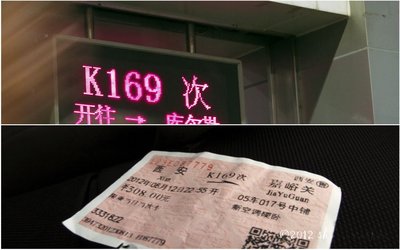