24 °C
View A Thread of Silk on automidori's travel map.

The story goes back a bit. After I was done with Xuanbi Overhanging Wall, I decided to have lunch no matter what, because it was already pass lunch hour. I am not going to be silly jeopardizing my own dream just because of neglecting my tummy. I still have a long long way ahead.

"I need something to eat," I said to my driver who was washing the car. "Is that a restaurant over there?"

"Ah, you want to eat," I heard him reply. He cleared up his pail, brush, etc. I wanted to tell him that he could continue his work while I had my lunch. But I didn't know how to say that in Mandarin. I only could repeated, "Is that a restaurant?"

My driver didn't answer. He kept on clearing his things and put them at the back of the car. Then he walked towards the front gate. Oh, is he going to walk me to the restaurant, I thought. But he didn't go to the direction which seemed to me to be a restaurant. Instead, while walking he turned his head to me and asked something.

I couldn't get what he was asking. Thinking that any kind of meal would do, I just answered I would like to.

At the gate he talked to a woman standing next to a stack of watermelons. The woman nodded, took out a big knife, and started to... "Wait!" I cried. "No, I don't want that. I want to eat rice."

I looked across the street. Nothing seemed to be like a place to eat. So I walked quickly to the building which looked like a restaurant. It wasn't.

"Isn't there a place to eat here?" I asked my driver.

"Ah, you want to eat," I heard him murmuring while walking back to the car.

"Oh, yes, I want to eattt!!" No, I didn't say that aloud, but I did feel like to. Why is it so difficult? I'm not requiring for a specific restaurant or a specific meal. So, you can bring me to any restaurant. What's the problem??

My driver started the engine and drove away. "Ah, you want to eat."

Along the way I looked left and right trying to spot a place to eat. Any place would do. When I say "any", I mean it. Regardless my sincerity, there was literally nothing.

Suddenly my driver pulled off. At my right, trees. I looked across the street. Ah ya, that looks like a restaurant. But... isn't it closed? It looks so quiet. In fact the whole street was quiet. "It's funny," I thought to myself. "It turns out there's a part in China where the people don't like to eat. Many of my friends would surely suffer in such a place."

My driver got off the car and stood next to me. A slight negative thought crossed my mind. Is he bringing me here, because he wants me to buy him lunch? 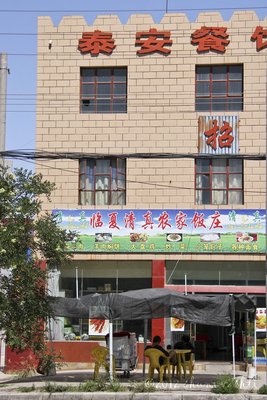 "That one over there." He pointed to building across the street. I nodded and walked in haste across the street, fearing he would follow me. The thing is, I'm traveling on budget and I don't know how much a meal would cost here.

Nobody was inside. Suddenly a little boy came out. In an adult manner, he looked up at me and chattered. O, oh... what is he saying? His plump rosy cheeks moved as he chattered. He looked serious and so did I, supposedly. And then I felt a dark shadow behind. I turned my head. Oh, it's the driver.

The driver talked to the little boy and then turned to me, "Bla, bla, bla.... yào méi yào ma?"

Once again I didn't understand what was being offered to me. Whatsoever, this is a restaurant. He can't be offering watermelon again. So I just answered "yào". Que sera sera, I'm starving.

Soon after the father was already standing in front of us together with a bigger girl which undoubtedly be the boy's bigger sister. Along with them was a boy toddler. As if the whole day had been boring, he looked at us excitedly turning his head left and right.

"Do you want the big one or small one?" my driver asked.

"Small one, please," I answered.

I laughed. But the others kept their serious looks. Oh, well.

And... my driver walked out of the restaurant.

As I sat, I watched the big sister and her oldest little brother wandering the kitchen - refrigerator back and forth. Their refrigerator was huge. The big sister had to stand on tip toe to reach the freezer. The little toddler was sweet not to bother his brother and sister helping their father cooking. What a beautiful family. But I'm hungry...

There was no other guest. I waited, and waited. I sighed and looked up. What? A huge picture of ka'abah spread along the wall in front of me! Oh! They are Chinese Moslems apparently -- and so are the whole neighborhood. So... there are all fasting for the Ramadhan month. No wonder it's difficult to find a place to eat. No wonder my driver seemed troubled when I told him I wanted to eat that he only could murmur, "Ah, you want to eat."

Indeed the cook of this restaurant, the kids' father, had nothing prepared as it was still long before breaking hour. Therefore it took so long to prepare just one meal for me. Outside I saw chairs turned over on tables. At night it would be crowded here. Next door looks like a restaurant, too, but the door is shut closed. Okay, so although I'm not yet in Xinjiang, I'm already in the Moslem region. 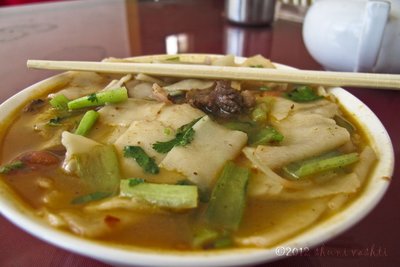 Here comes my que sera sera meal. With no doubt, it's no pork. Either I was too hungry or it really was, the taste wasn't bad at all. Together with a bottle of green tea only cost 11 CNY. Terrific, isn't it?

"How was it?" my driver asked when I returned to the car.

My driver looked satisfied as if he had served me with the best of China.