Not business as in trading. 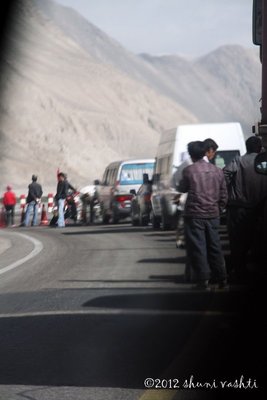 As already mentioned in previous post, I got caught in a traffic jam twice. At first I didn't dare to even roll the window opened, because I thought there was a riot. I had already read about the occasional clash between the Han Chinese and the Uyghur. Now, here it's happening for real, I thought. 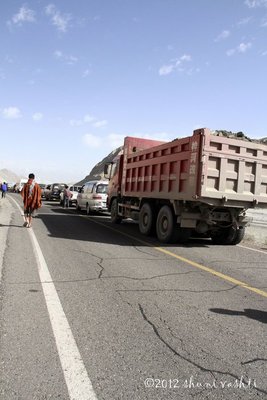 But then I saw people getting off their vehicles. So did Junki. So did I. 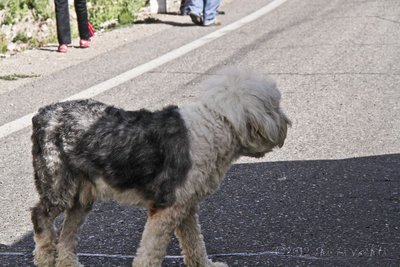 And so did the dog. Cute fur, don't you think? It's like a black coat worn over him. 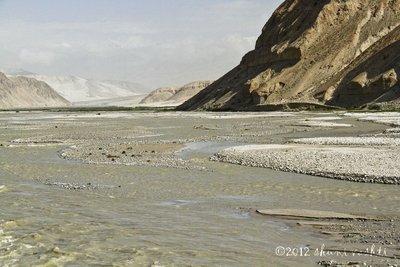 The scenery by the side of the road soothed the irritation of waiting. 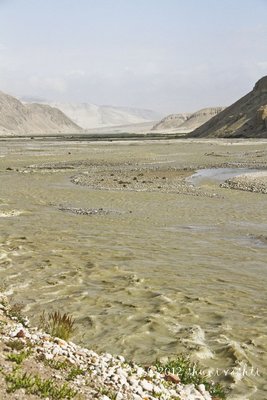 It's nothing in comparison to Karakul, though. 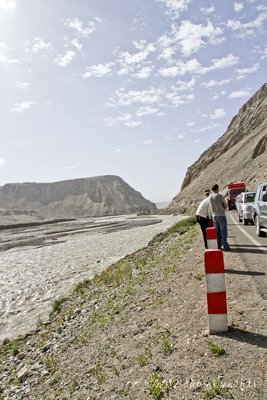 At the second traffic jam which took longer, I saw women stepping up a foothill on the left side of the road. Oh, to do business in quotation marks. Thinking that traffic seemed not to be moving for quite awhile and that 'business place' was several hundred meters ahead anyway, I would have plenty time to do mine as well.

"I'm going to the toilet," I told my driver, in Mandarin of course.

"It's not good there," he answered, in Mandarin also. "It's better at bla, bla, bla (I didn't understand.). We will arrive there soon."

My driver nodded with a 'see for yourself' look.

As I walked pass the vehicles and got a closer view of the 'business place', I saw women after another squatting behind a short wall of stone stacks. As one woman squatted, I could see a glimpse of her smooth white butt popped out the side of the wall. Wow...

Now, try to picture this. In China people drive on the right side of the road. The driver sits on the left. Due to this long traffic jam, cars lined up on the right side and the left side was empty, because traffic from the opposite direction was jammed as well. Being bored, drivers had rolled down their windows, sat back, and most likely tried to fine anything to amuse themselves. Hence, if I can see that white butt clearly, so would these drivers.

I walked closer to the 'business place'. There were wall partitions here and there. Thinking that in China you can do your business anywhere as far as your pride goes, I searched for a more strategic place, which wouldn't display my butt to the world below. "Why do all the women go to the same place to pee? Why doesn't anyone be more creative?" I wondered while pulling my belt off. Ouchhh... what's wrong? Ah, why is it that it gets stuck when I'm in such a hurry?

I heard a woman yelling. Never mind. Chinese people raise their voice even when they whisper. I kept on trying to pull my belt off.

When I was just about to pull my zipper down, a strong hold grabbed my left arm. "!@#$%&*!!!" It was in Mandarin, but I was too shock to figure out what she was trying to say. She was an Uyghur lady, like my host lady in Karakul. She pulled my arm and pointed to the direction where every lady had displayed their butt. Oh, no! I'm not going to go public that far. I walked down the hill. This Uyghur lady kept on talking. I shook my head.

Though Abdul, my driver, had attempted to cheat Junki, he was to be trusted when he said "bù hǎo" about this 'business place'.

When I was in Jiaohe Ancient City, there was a girl toddler and her Mom. As a toddler isn't a toddler if she doesn't toddle, so was this girl. While she toddled up and down in front of her mother's legs sitting on a stone bench, suddenly she paused, pulled up her skirt, squatted, and there water flew from between her thighs to the pavement ground. She got up, looked up at her mother, and her mother smiled back at her as if she was the happiest woman in the world for having such a cute healthy girl that can pee. Relieved, the toddler continued her toddling. Bouncy, bouncy.

I haven't been to China's metropolitan cities like Beijing or Shanghai. However, through the many cities I've been in China, a hole on the back of a toddler's pant has been common sight. In a girl's case, wearing a skirt, it's more practical. You don't need to make a hole. She'll just need to squat and do it. Just do it.

Hence, when I was first 'taught' how to do my business by the side of the highest highway in world, in Karakul, came the conclusion: In China, you can do your business anywhere as far as your pride goes. In other words, as long as you don't feel embarrass, you are justified to pee in front of a crowd, if you feel like to. It turned out that 'anywhere' isn't exactly anywhere if you are no longer toddling. So was it with this hillside where the traffic had jammed. "!@#$%&*!!! How old are you?! You want to pee like a toddler?! Shame on you!" Maybe that was what the Uyghur lady was saying to me.

At the checkpoint, after having my passport checked, I sprung into a small building with a sign above in English: "Tourist WC". But a small hand hit my stomach. "Yīkuài!" A handsome but stern looking Uyghur boy stopped me in front of the door. It cost one yuan for doing my business, in a decent way.