"Ample water was crucial to Turpan, so that the oasis city could service the many caravans on the Silk Route..." ~ Wikipedia

47 °C
View A Thread of Silk on automidori's travel map.

Let me quote Wikipedia to explain what Karez System is.
"The Turpan water system or Turfan water system (locally called karez water system, Uyghur: كارىز‎, ULY: kariz) in Turpan, located in the Turpan Depression, Xinjiang, China, is a qanat system adapted by the Turpan people. The word karez means "well" in the local Uyghur language. Turpan has the Turpan Water Museum (a Protected Area of the People's Republic of China) dedicated to demonstrating its karez water system, as well as exhibiting other historical artifacts.

Turpan's well system was crucial in Turpan's development as an important oasis stopover on the ancient Silk Road skirting the barren and hostile Taklamakan Desert. Turpan owes its prosperity to the water provided by its karez well system." 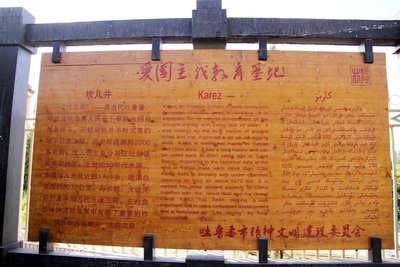 According to the information board at Karez Well Folk Custom Garden, I copy for you:
Karez, an irrigation system of wells connected by under channels used in Xinjiang. It is especially for its natural environment of the drought climate with being lack of water. It was created by the local people in ancient times and has improved a lot on its digging skills. Karez is distributed mainly in Turpan and Hami area. It has a long history and can be dated back to 2000 years ago ini TuHa Basin. According to the historical data at the end of 1950s there were more than 1784 Karez wells in Xinjiang with under channels covering as long as about 5272 km. It is named the three ancient projects of China together with the Great Wall and the Grand Canal karez has been playing a very important role in oasis civilization development and is honoured as "Life Spring" by local nationalities. 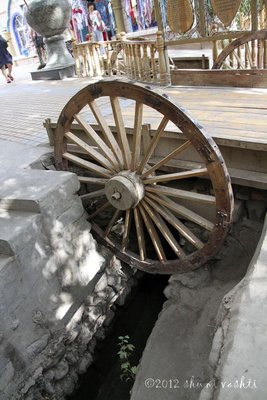 Proceeding the entrance gate, there is a bridge. 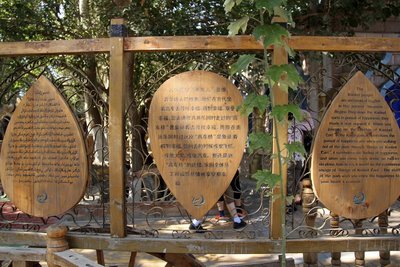 There is something to be said about this bridge. Again I copy for you the English version:
The Kankel people are ancestors of Uyghur in the ancient Western Region. They drove the Kankel carts in pursuit of happiness; they made it and enjoyed it. When you passing on the Bridge of Kankel Cart in Karez park it symbolizes the pursuit of happiness and when you walking out of the park throught "Bridge of Kankel Cart", it symbolizes the finding of happiness, and when you come back home no matter by plane, train or car, it would be the continuous voyage of "Bridge of Kankel Cart". The staff of the park wish you enjoy the happiness to your heart's content.
Let's say, "Amen!" 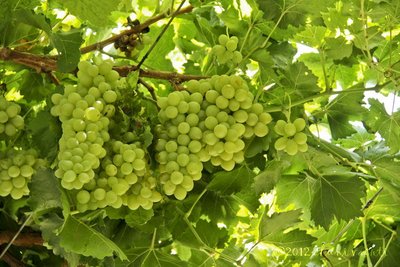 With water being the theme, I was surprised to see grapes... 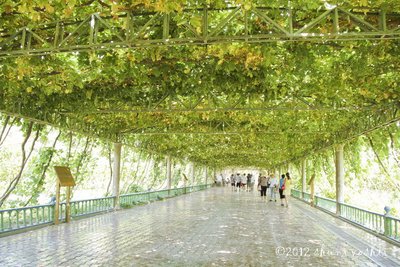 ... covering a long corridor. Along this corridor stood information boards about everything regarding to the Karez system e.g. (I copy for you.):

Water convey in the underground channel needs no power force and gards against evaporation. Water supply to the ecological vegetation in non-irrigation period is the model of harmonious relationship between the human and nature.

The other information boards explained about where the shallowest head well is, the largest water pond capacity, the longest vertical shaft, etc. Such information would be more meaningful if we try to get the picture of the system itself. 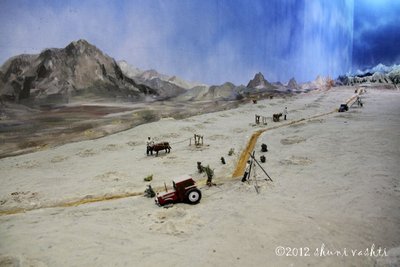 So here's the global picture of Karez System. While looking at this picture, we can refer to Wikipedia which says:
Turpan's karez water system is made up of a horizontal series of vertically dug wells that are then linked by underground water canals to collect water from the watershed surface runoff from the base of the Tian Shan Mountains and the nearby Flaming Mountains.
Do you see that blue and white in the background. That's the snow melting from Tian Shan Mountain. If you remember the photos I took from the car on my way to Gaochang, those are the scenes of Flaming Mountain which shown on the left of the photo above. By the way, the photo is of a 3D image of the Karez System from the museum.

An illustration by Samuel Bailey from Wikipedia shows the detail of the system: 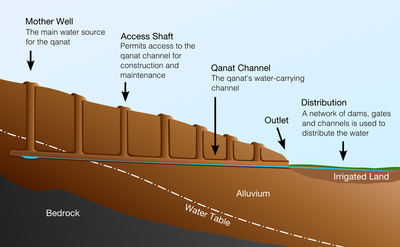 As described here, the canals channel the water to the surface, taking advantage of the current provided by the gravity of the downward slope of the Turpan Depression. The canals are mostly underground to reduce water evaporation. Turpan Depression is the Turpan Pendi I wrote about in previous post. It's 154.31 meters below sea level. 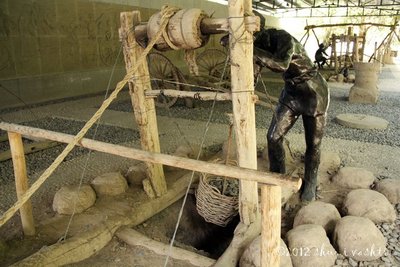 I'm copying again the English version of the information board. Please keep in mind always, when I say I'm copying, that means I am. So if you find any awkward expression or grammar, you should know that this comes from China. If you do know China, you would certainly appreciate that at least you still can grasp the idea. Okay, here is it:
Hand winch. It is a primitive lifting device used for carrying earth from the Karez shaft with intensive labor power and suitable for excavation of the Karez within the depth of 10 meters. 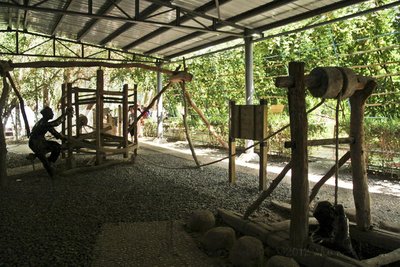 Copying from the information board again:
Capstan winch. Kraze artisan can be put into the shaft bed over a hundred meters deep by strong men sitting on the capstan through controlling the rate of descent with foot treadle. it can also be use for carrying earth with animal power. It was a more advanced lifting device than in theory of mechanics. 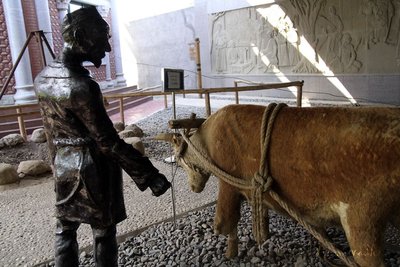 Animal powered winch. it is an ox powered lifting device use for excavation of the Kraze within the depth of teens meters, reducing the laboring intensity of excavation. 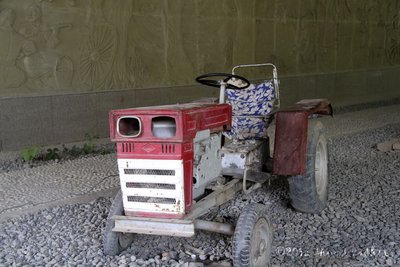 Copying from the information board again:
Mechanization. Now various machinery equipments are used in the construction of the karez project being as modernized construction method of reducing labour intensity, improving efficiency, saving time and human power.

The very one thing I regretted of in Xinjiang was that I didn't take any pictures of the real Karez wells along the street. Many times my driver pointed out at the wells on our way to Turpan Pendi which was opposite direction to Karez Museum. I just nodded, because I thought I would see them anyway at the Karez Museum. I was completely wrong. 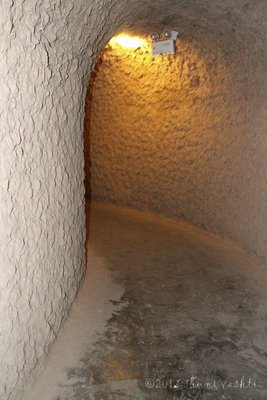 What I could see inside the museum was only a replica. Inside these tunnels we could see the various kinds of shafts. 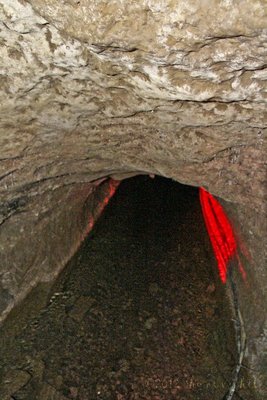 Copying from one of the information boards again:
Total length of underground channel of karez in the whole Xinjiang reaches 5272 km and open channel length reaches 313 km. The number of vertical shafts totals to 172367, with total depth of 2593 km. There are 416 water ponds (small reservoirs) in total.

May Wikipedia once again explain why:
"Ample water was crucial to Turpan, so that the oasis city could service the many caravans on the Silk Route resting there near a route skirting the Taklamakan Desert. The caravans included merchant traders and missionaries with their armed escorts, animals including camels, sometimes numbering into the thousands, along with camel drivers, agents and other personnel, all of whom might stay for a week or more. The caravans needed pastures for their animals, resting facilities, trading bazaars for conducting business, and replenishment of food and water." 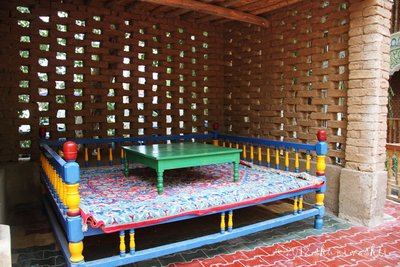 Are we now ourselves weary? Let's sit down and relax the Xinjiang way, or even the Middle Eastern way.

P.S.
Let me show you another interesting finding from this area. 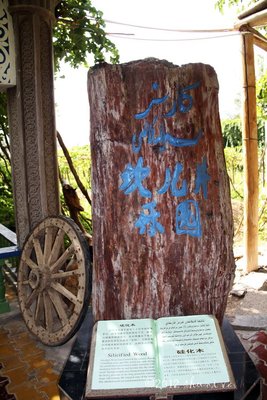 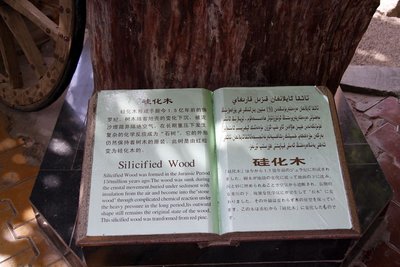 Silicified Wood was formed in the Jurassic Period 150 million years ago. The wood was sunk during the crustal movement, buried under sediment with insulation from the air and become into the "stone wood" through complicated chemical reaction under the heavy pressure in the long period. Its outward shape still remains the original state of the wood. The silicified wood was transformed from red pine.