The natural features of the site provide the setting that attracted the original Roman town of Hierapolis. Hierapolis! 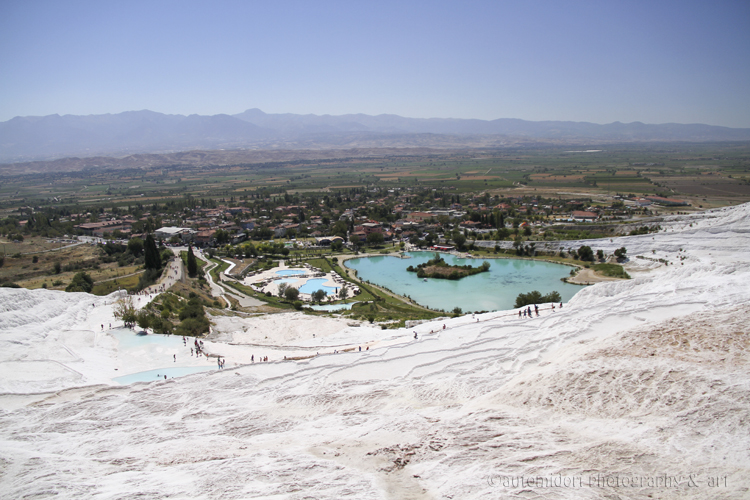 Since thousands of years ago, people from many parts of the world have come to Pamukkale for its hot spring and travertines. In the past many sought for healing, some sought for God. Today, people seek the experience of those in the very past: bathing. 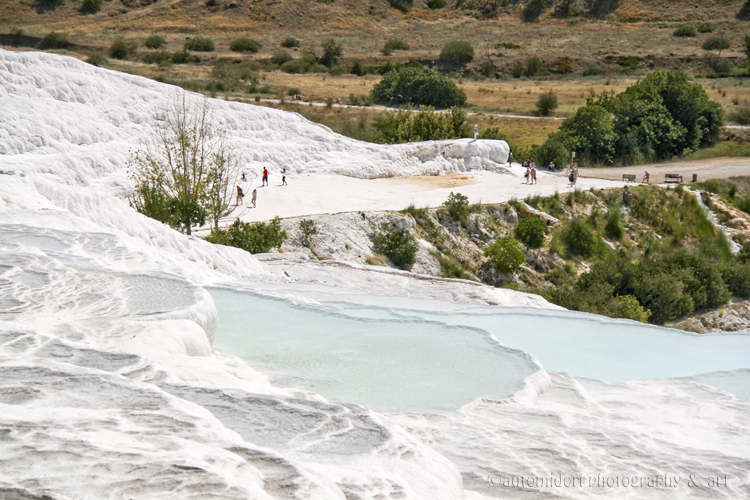 In Turkish, "Pamukkale" means "cotton castle". Indeed it does look so -- but not in summer like now. The thermal spring of Pamukkale is one of those springs which have been in use since antiquity, and has provided therapy to humanitythrough the millennia. 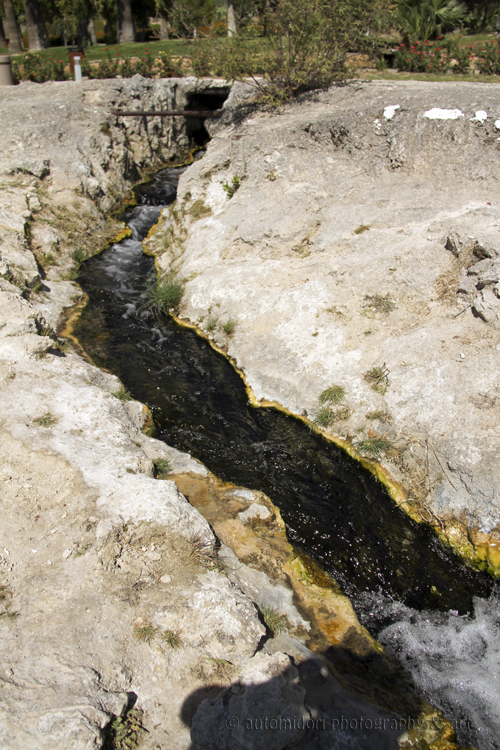 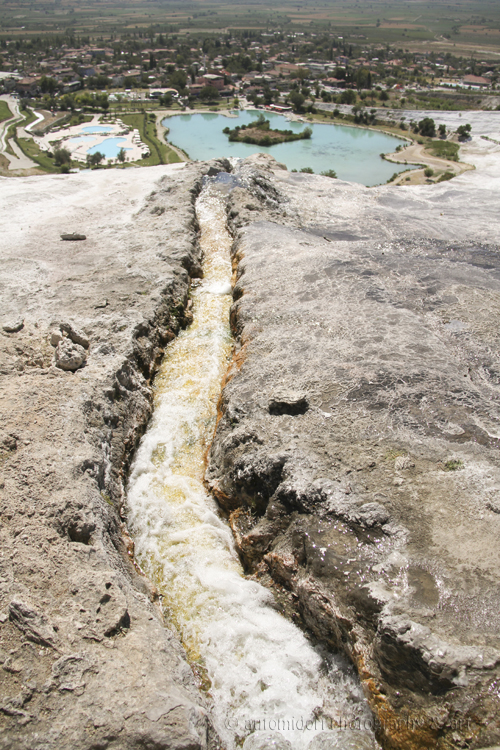 However, if visitors are allowed to walk in the cascading pools, that leads to squashing and dispersing the soft jelly of calcium carbonate. Thus, visitors may only go into the pool barefoot. 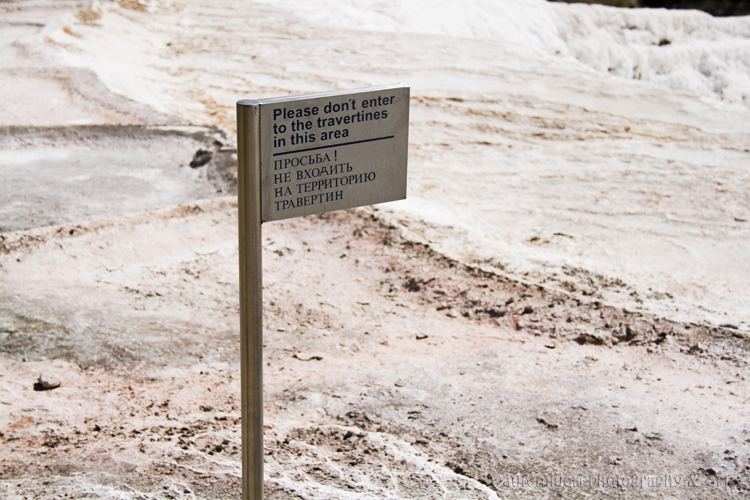 At present, thermal water is released over the travertine in a controlled programme. Of a large amount of water is allowed to flow on a certain area for a long time it leads to moss formation and darkening of the colour of the travertine. The atmospheric conditions, temperature loss and duration of the flow affect the creation and maintenance of pure whiteness. This explains why some areas are left dry and not allowed to be entered.

Says Wikipedia:
As recently as the mid-20th century, hotels were built over the ruins of Hierapolis, causing considerable damage. ... When the area was declared a World Heritage Site, the hotels were demolished and the road removed and replaced with artificial pools. Wearing shoes in the water is prohibited to protect the deposits. So said my guide, there are the artificial and the natural pools. These ones are the artificial ones.

Here are the natural ones. Have a look! 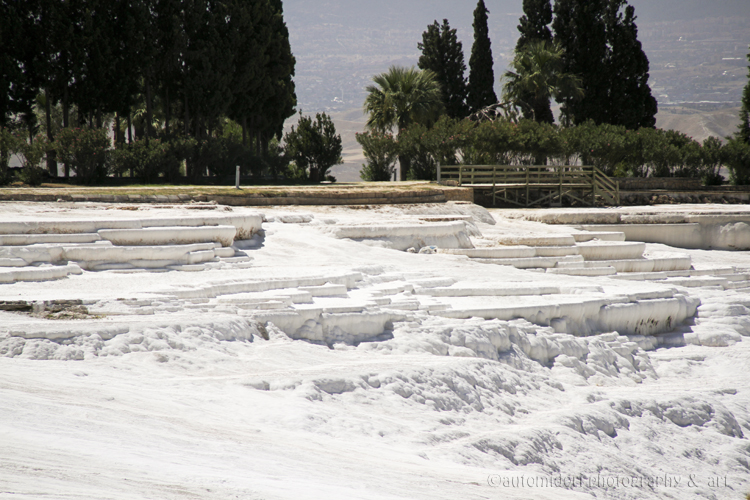 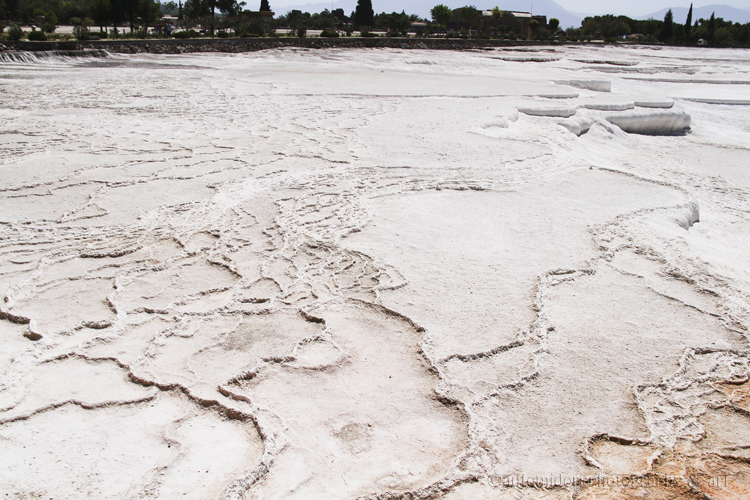 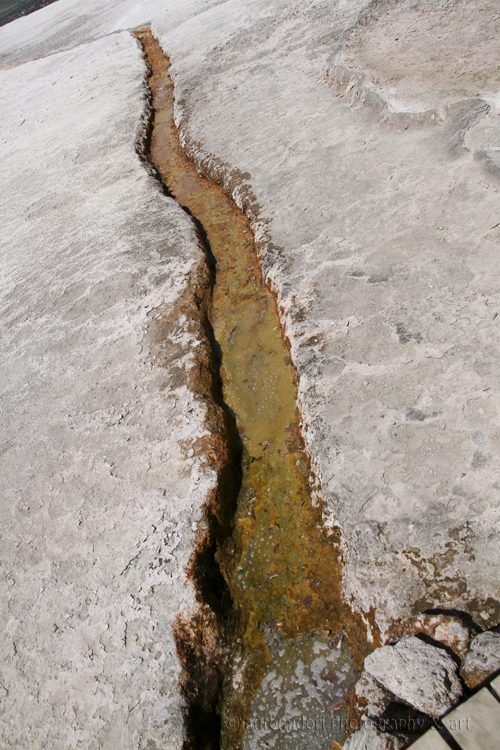 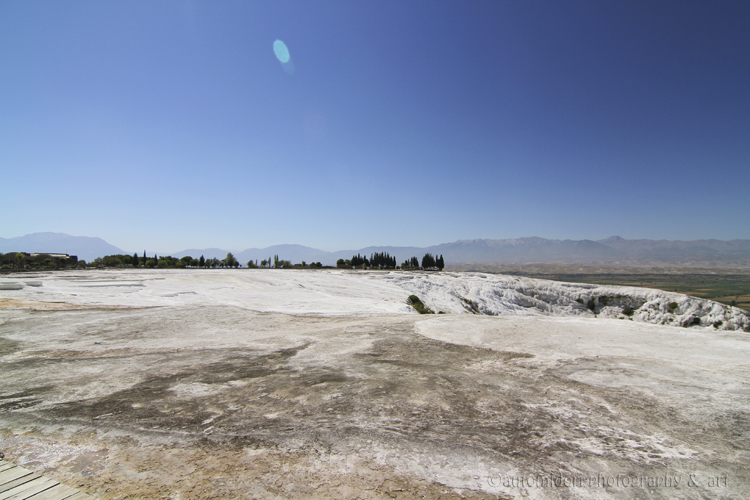 Too bad, the pool just next to the visitor's path was under maintenance, meaning dried up. Otherwise we could have dipped our toes in the natural pool of the Romans in ancient time. It were actually in these pools which the Romans bathed in ancient time.

To be noted, the artificial pool and natural pool are in separate location, although not far away apart. 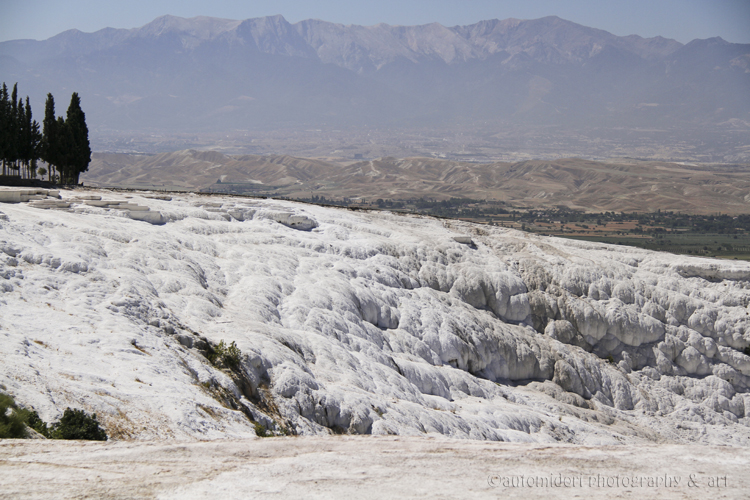 According to Unesco:
The Pamukkale National Park is the focal point for the natural values of the site, formed by its highest travertine terraces, with 20 m high cliffs and waterfalls, and situated along on the foothills of the Cokelez Mountains. The terrace is about 200 m above the Curuksu plain and extends some 6 km between the villages of Pamukkale and Karahayit. Semi-circular pools occur in a step-like arrangement down the upper third of the slope. Fresh deposits of calcium carbonate give the pools a dazzling white coating. The travertine deposits, Quaternary in age, are thought to originate from a fault in the contact zone between the Mesozoic crystalline rocks and the layers of the Neogen series. The springs form part of a complex hydraulic system extending 70 km to the north-west to Alasehir and west along the valley of the Menderes River. These canals take thermal water to nearby villages and agricultural areas, some over the years having accumulated travertine deposits up to 10 m in height. The oldest rocks in the area are crystalline marbles, quartzite and schists and are located in the northern parts of the park. Most of the rocks are of the Pliocene epoch. 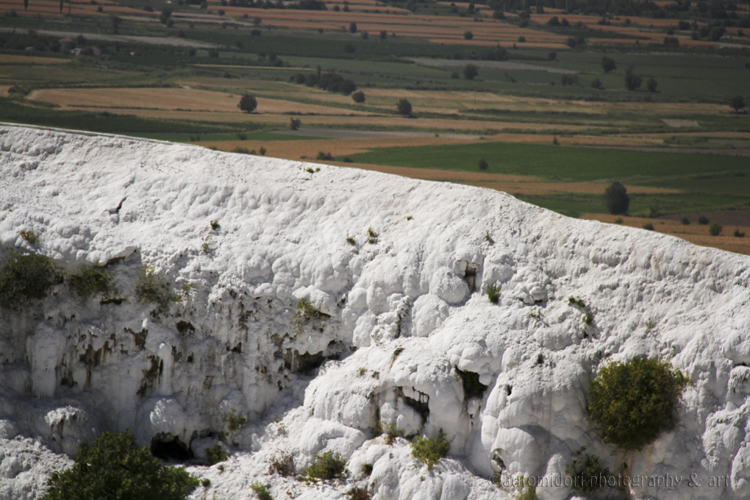 A vegetation map produced in 1969 showed land use, in descending order of area covered, as cultivated land, bare land subject to erosion, bare land urban areas and maquis. ... The natural features of the site provide the setting that attracted the original Roman town of Hierapolis.

Hierapolis? Come along with me!