Ihlara Valley and Beyond

“Very truly I tell you, I am the gate for the sheep. All who have come before me are thieves and robbers, but the sheep have not listened to them. I am the gate; whoever enters through me will be saved. They will come in and go out, and find pasture." 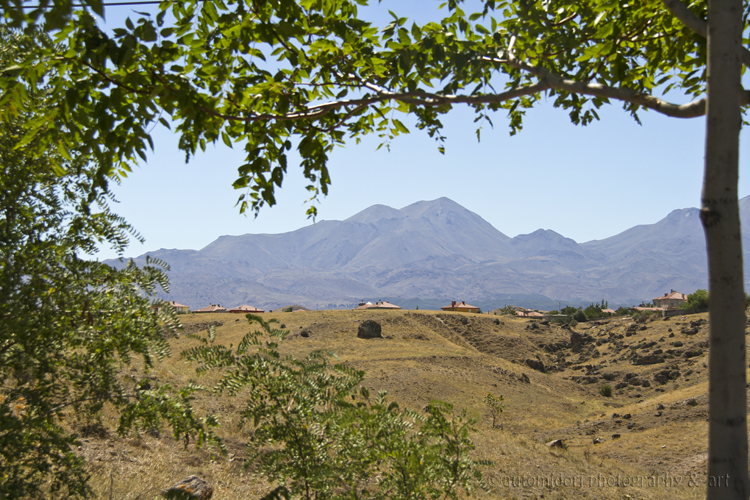 So here we are in Ihlara Village. 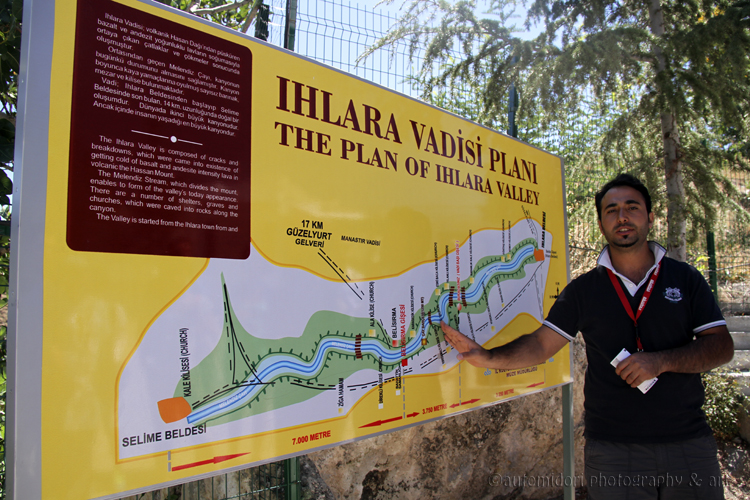 Our guide explained about the trekking route we would have to take. However, for most of the time, I was left behind. I put myself behind, to be exact. The volcanic rocks sprung up into the blue sky under the smiling bright sun. Unlike in Derinkuyu, it wasn't chilly anymore. Why rush? Enjoy! Take pictures! Lots, and lots! Lack of time to absorb a place has been always the thing I hate in joining tours. It often feels like coming to a place just to mark a flag and say "I have been to bla, bla, bla."

Let me quote from Wikipedia:
Ihlara is a township with own municipality in Aksaray Province, Central Anatolia, Turkey. It is situated at about 40 km (25 mi) from the province seat of Aksaray and near the town of Güzelyurt. The township is famed for the nearby valley of the same name, Ihlara Valley, which is a 16 km (10 mi) long gorge cut into volcanic rock in the southern part of Cappadocia, following several eruptions of Mount Erciyes. 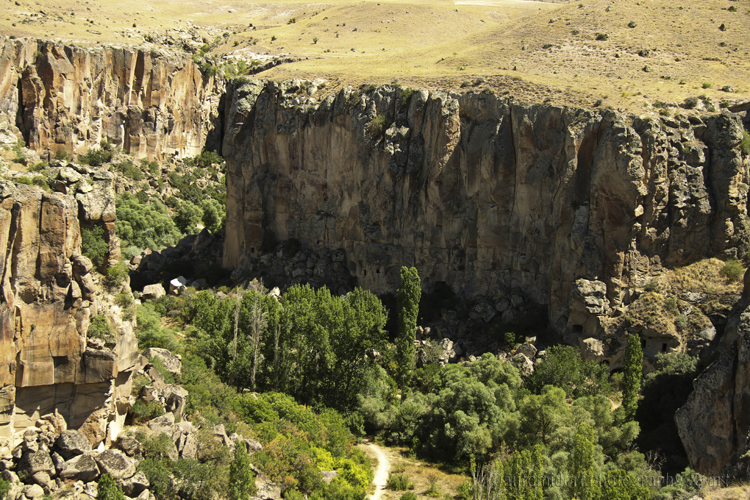 Here's that long gorge cut into volcanic rock. Do you see that white tiny road below? 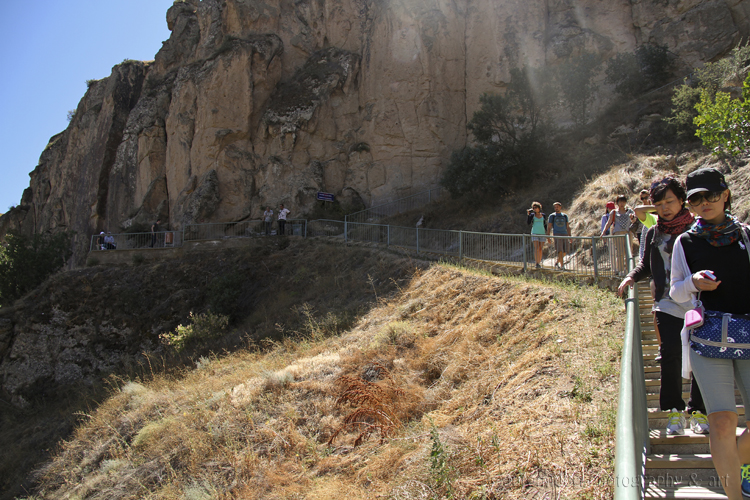 Now we go down into the valley. Oh yeah, those are my Korean fellow tourists. Yesterday I was with another bunch of Korean tourists. It looks like Koreans, too, love Turkey. I even spotted some travel agencies putting up information boards in Korean. 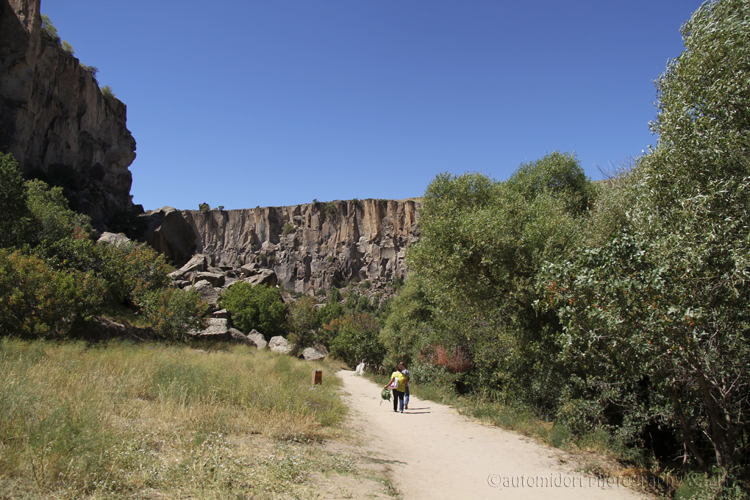 And then we trekked along this path guarded by gorges on our left. 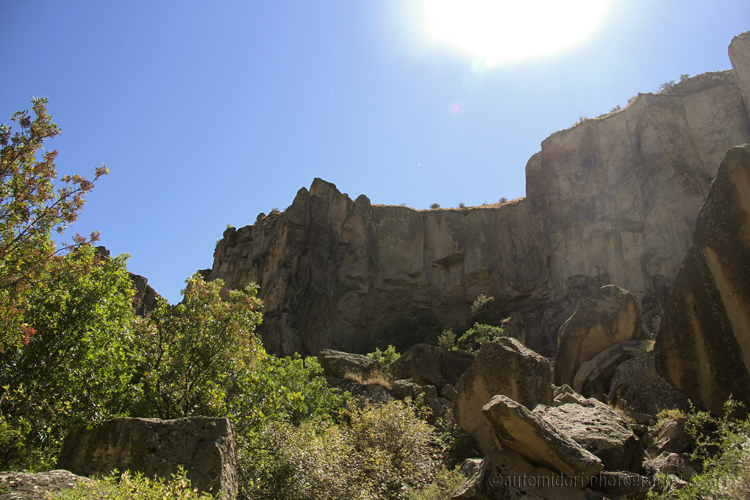 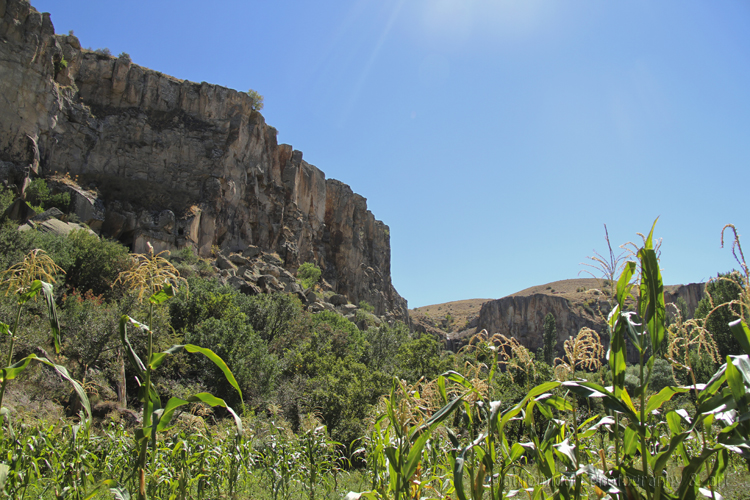 Let me show you another one with the corn trees. 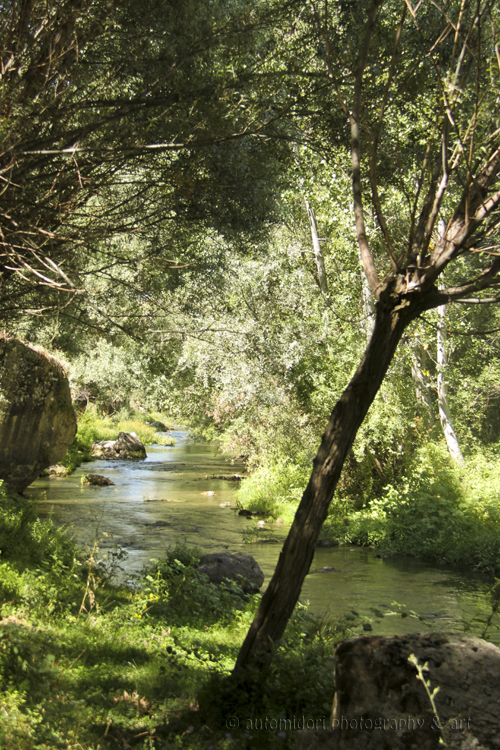 On our right, Melendiz Stream cheered along. Somewhere along this stream, our guide gave us a break. Some grabbed the chance to throw themselves into the pool or enjoy a can of cold beer while dangling their legs in the pool. That was when I eventually caught up with my group. Poor tour guide. He looked worried when he saw me.

"Where have you been? I walked back, but still I couldn't see you. You are small, you know!"

"Hahaha! I took pictures along the way. It's such a waste to let them just go by."

"Is that why you carry such a big backpack?"

For the sake of finance, I didn't buy any drink. The mineral water in my backpack was more than enough. Healthy and cheap. That's something rare. For the sake of time, I didn't join into the pool. If I do, it would need time to dry myself. Thus, I would be more behind. So, I made myself a faithful onlooker. It's nice to watch people laughing, teasing each other, etc. even I barely know them.

Suddenly, Turgai, our tour guide (his name is really Turgai) came to me. "By the way, I'm sorry for saying you are small just now. I didn't really mean it. I was ...."

"Huahahaha!" I couldn't hold myself. "Never mind! I am, small. Even in my country!" 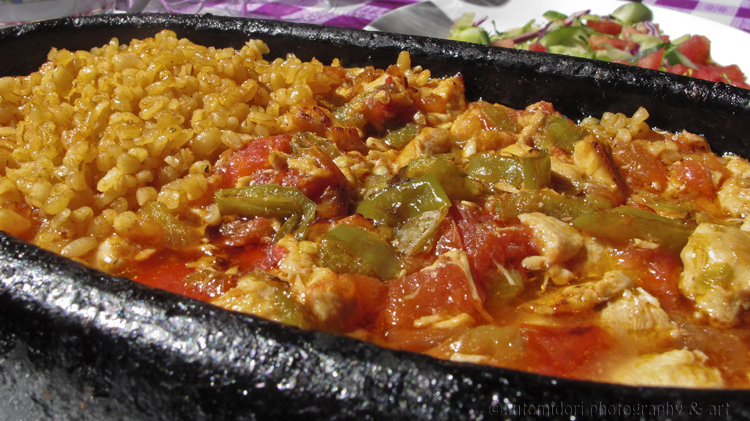 In Belisirma, by the side of Melendiz, we had lunch. It was a place where restaurants partly hung over the side of the river, built under the shady trees. 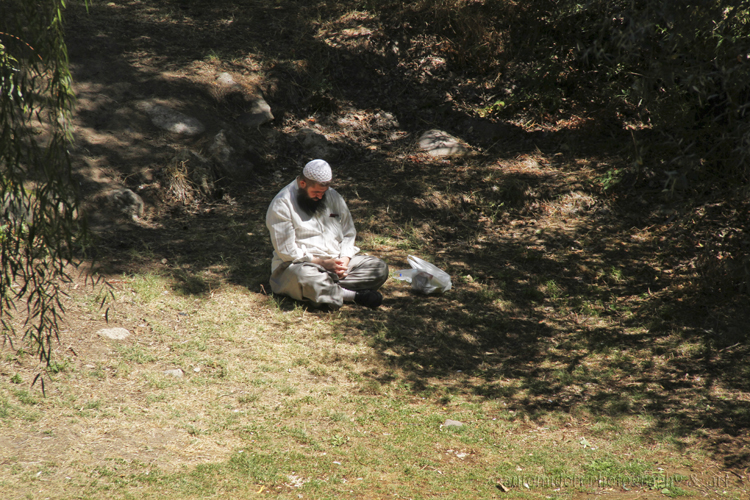 The shady trees here are apparently everything to everyone. 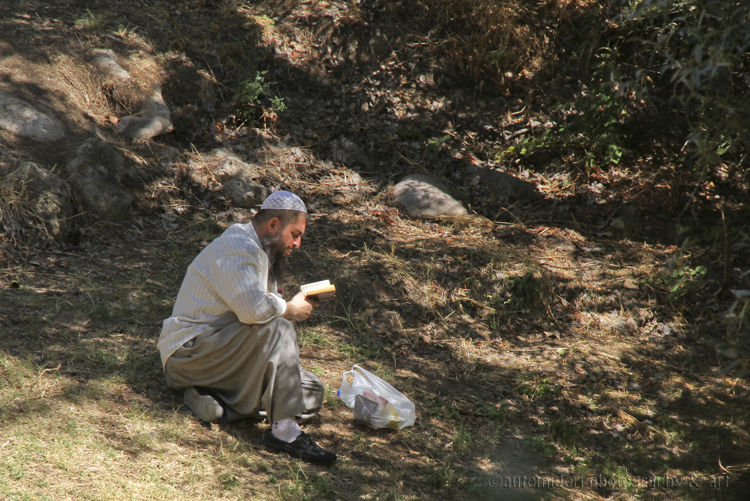 It's a place to savor both, worldly and spiritual, snack. I took these pictures while my group were inside one of the old churches admiring magnificent frescoes. As stated by Wikipedia:

Due the valley's plentiful supply of water and hidden places, here was the first settlement of the first Christians escaping from Roman soldiers. In the Ihlara Valley there are hundreds of old churches in the volcanic rock caves. The most known churches are Ağaçaltı Church with cross plan, Sümbüllü Church, Pürenliseki Church, Kokar Church, Yilanli Church, Karagedik Church, Kirkdamatli Church, Direkli Church, Ala Church, Kemerli Church and Egritas Church. 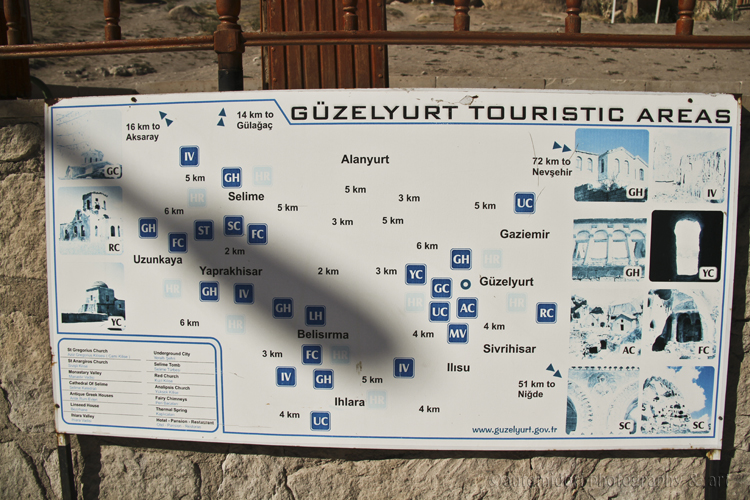 By car, we moved on to Selime. 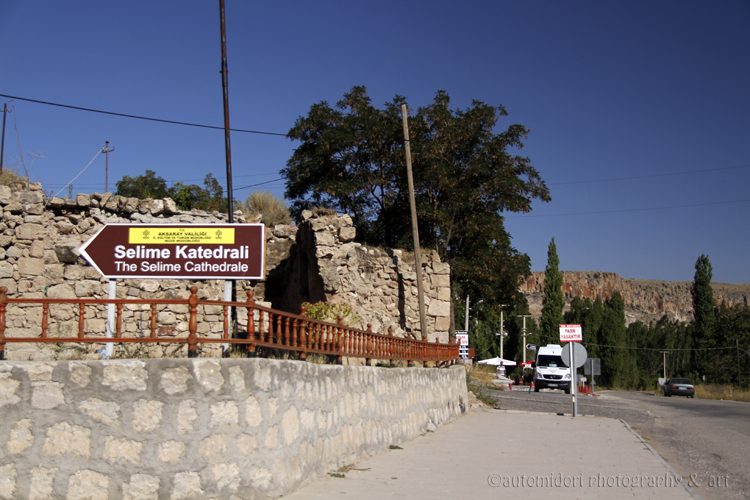 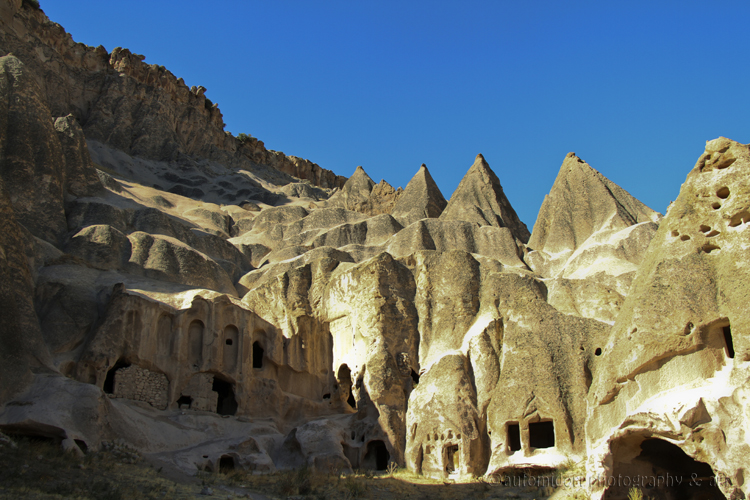 Quoting from The Rough Guide to Turkey:
A number of massive, rather squat fairy chimneys dot the valley at Selime, many of them containing churches, and there's even a rock-cut cathedral... 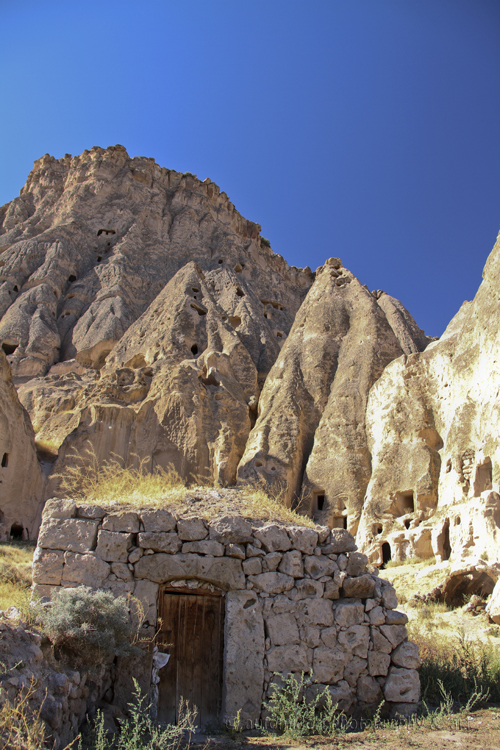 I wonder whether this room is still being used. It seems it is. At some caves I saw clothes hung. 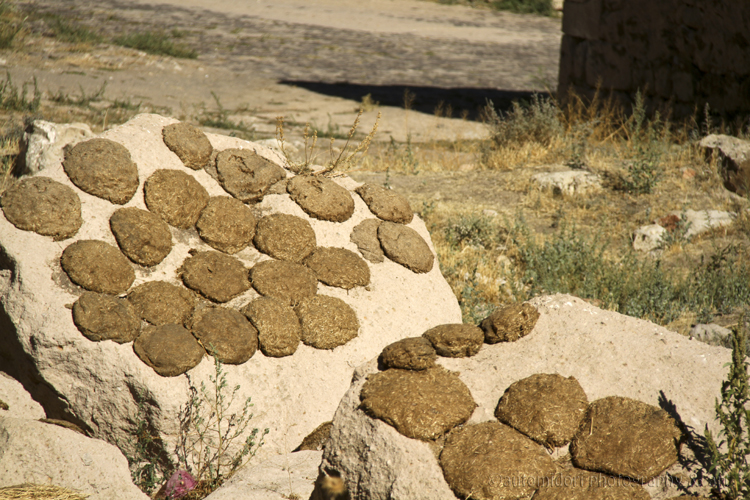 And I saw these also! These must not be coming from the 11th century when most of the churches in this area were built. These are dried but fresh... poo! Sheep's poo. What for? Fuel. 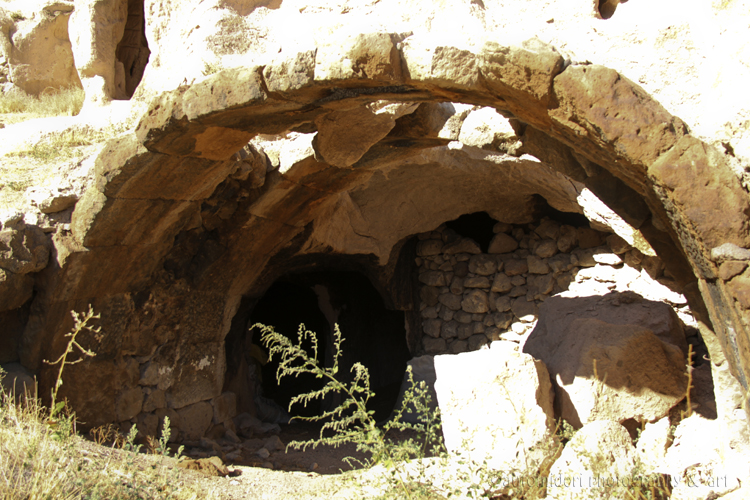 Our tour guide explained how on those days shepherds brought their flock to this site. (This place seem to have been a place for both, worldly and spiritual, shepherds. Aha.) At night, said our tour guide, the shepherd would gather his flock into a cave, and the shepherd would sleep at the door of the cave with his head at one side of the cave and his feet at the other. "Do you know why?" he asked us.

"So thieves cannot steal his sheep. If anyone does, he would have to step over his body."

I was thrilled over and all.

Jesus said again, “Very truly I tell you, I am the gate for the sheep. All who have come before me are thieves and robbers, but the sheep have not listened to them. I am the gate; whoever enters through me will be saved. They will come in and go out, and find pasture." (John 10:7-9) 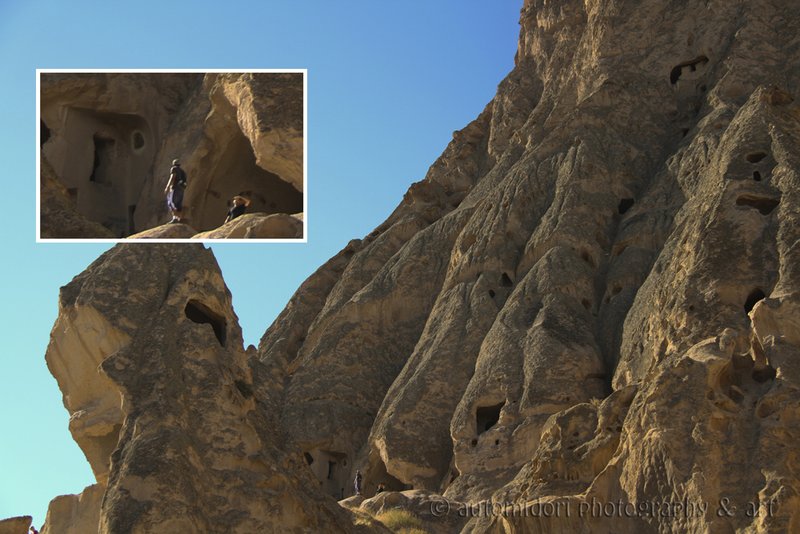 Can you spot out where the two men in the inset are? That's how grand. Let's climb up! 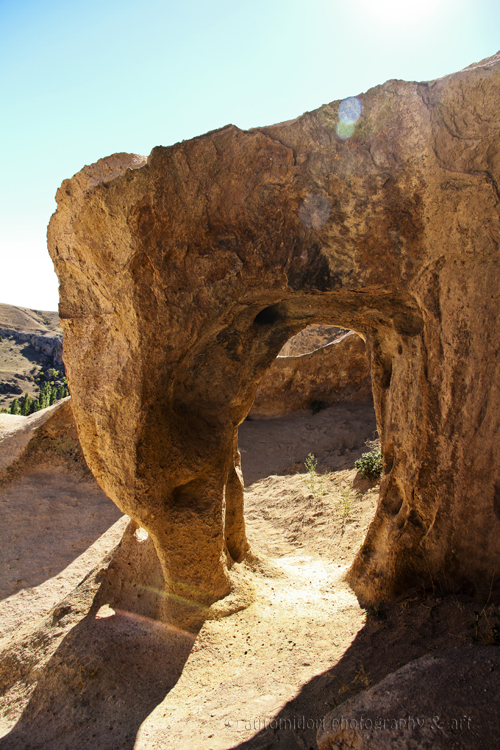 Hold your breath, we aren't really up yet. 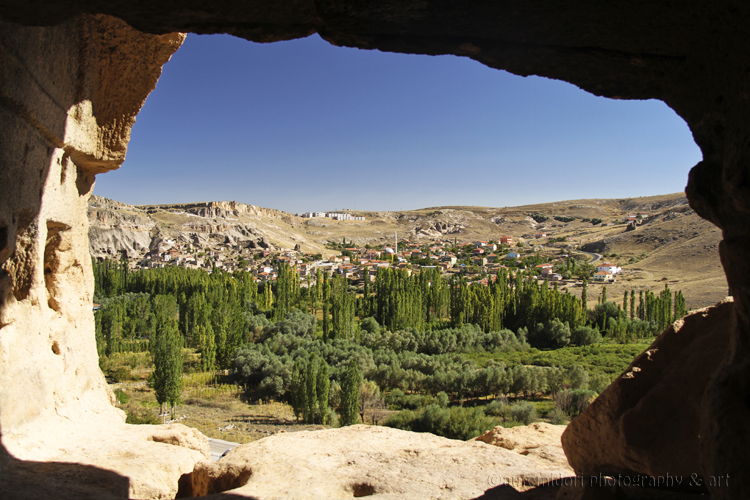 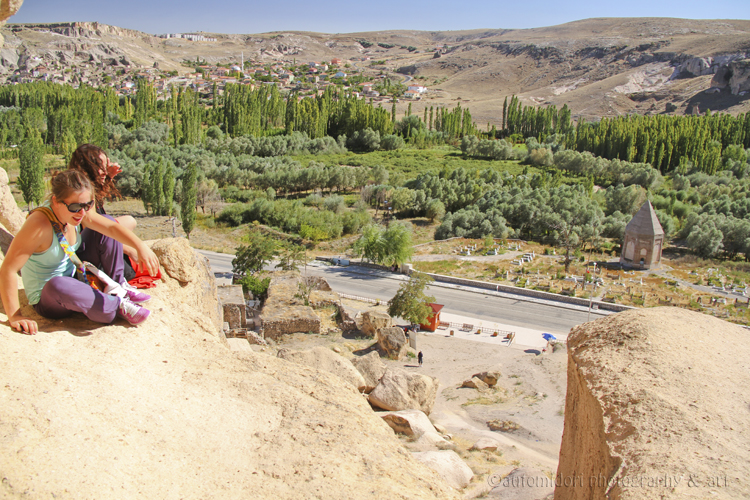 Quoting from The Rough Guide to Turkey again:
One of the most beautiful parts of the whole valley, the troglodyte village of SELIME has previously been passed over in favour of the better-known, more frequented Ihlara village area. 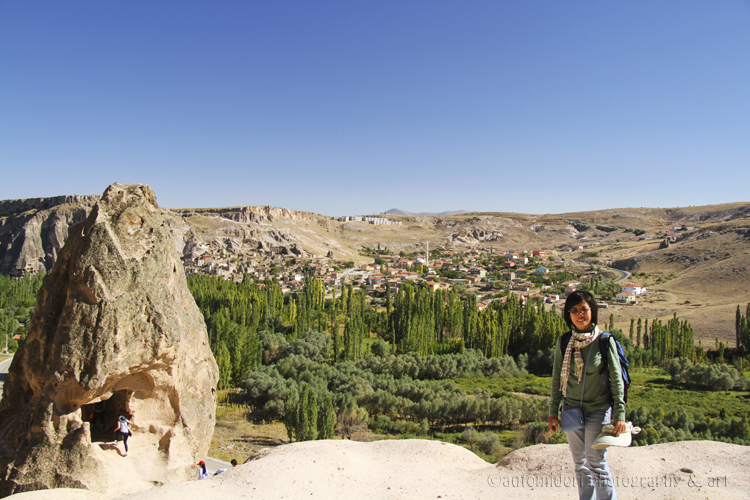