Cappadocia Part TWO of Many

"Which tour did you take today? The green one or the red one?" Barbara asked me in the evening. 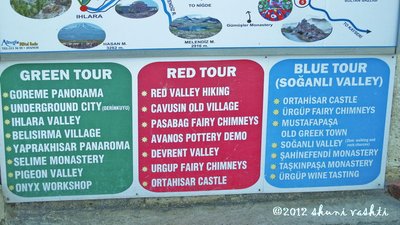 It turned out that tours in Cappadocia are differentiated by 'green', 'red', and even 'blue'. This information board I photographed from a tourist agency near the bus station in Goreme. I'm not sure whether it's the same agency as the agency that held my tour. I don't even know the name. I had Barbara book the tours for me and payed the money to her: 90 lira for one tour and 80 lira for the other. Comparing the itinerary I had gone through, it didn't look exactly the same as this listed on the board. Neither does this one nor mine seem exactly the same as the itinerary listed on the travel agent's flyer in Nevsehir. That agent who deliberately dragged me off the bus, remember?

In my itinerary, I watched the pottery demo in one day together with wine tasting. But according to this information board, Pottery Demo is included in "Red Tour" and Wine Tasting is included in "Blue Tour". According to this information board, Pigeon Valley is one of the "Green Tour" itineraries. But in that travel agency's itinerary from Nevsehir, Pigeon Valley is one of the "Red Tour" itineraries.

Here's my suggestion, when you book tours, book them from one travel agency. By this way you won't end up visiting one place twice. Of course if you purposely want to, that's a different thing.

My tours included lunch, (but exclude drinks), pick-ups, and drop-offs. Lunch on first day was awesome. It was a complete course from appetizer to dessert.

Oh yeah, needless to say, including English-speaking tour guide as well. Tour on the second day was funny. There happened to be some Turkish guests in my group. Therefore, after explaining to us, the foreigners, our tour guide would turn to the Turkish guests and repeat his explanation in Turkish. However, from the middle to the end of the tour, his Turkish explanation became lesser and lesser. More often he did not repeat in Turkish. What a total opposite thing to China! I felt sorry for my Turkish companions. In order to learn more about their own country, they have to understand English! How is that?

The time of my travel in Turkey was I think, the highest of the high season. There were so many guests that time in a limited space e.g. museum, was limited as well. When one tour guide is done with his explanation, he has to bring his flock immediately to the next spot, because other groups are waiting behind. If there are any questions, the time is outside the area. Same thing it is, you cannot enter a spot if the group in front of you is not done yet. At one time, my tour guide let us join another tour's group to listen to that tour group's guide explanation.

Another thing that comes in a package is, visiting churches. Regardless of your interest, regardless of your religion, you are going to visit churches, and churches. If you happened to be ignorant about the long-long-ago history in Turkey, you won't believe you are actually touring a Moslem country. I was deeply impressed when a tour guide (not from my group) wearing a veil, explained about the Bible and the saints with so much enthusiasm as if it were her religion she was talking about.

Of course, if you want to specify on visiting the seven churches mentioned in the Book of Revelation, you can join a specific tour for that. And, you don't need to find a church or Christian foundation to book such a tour. That's why Turkey is so charming.

Do you know how long it took to check in and check out at the immigration in the airport? More than an hour! On the foreigner's line. There were indeed many counters and the immigration staffs weren't fussy either. Turkey simply had so many guests. Who would not love Turkey?

I have always kept Insight Guides my travel guide and followed it almost like I follow the Bible. However there's one thing -- so far, one -- that I'd like to object to. Insight Guides Turkey mentioned to avoid July and August, because it's extremely hot. First, that must depend on which part of Turkey. Second, if 'August' means 'from the 1st to the 31st', my tour guide said,

It had been my experience. If you come to Cappadocia during the last two weeks of August, bring your jacket along. The more need, if you are going to take that famous balloon ride. If your body isn't familiar with low temperature, better not wear shorts. After all, Insight Guides wasn't published in Turkey, but my tour guide was.