Where is the Bus?

Before leaving my home country, I already booked a night bus for Bursa - Cappadocia through Suha Turizm. I couldn't go through the online booking process, because for some reason my credit card wasn't accepted. I emailed the contact service and luckily someone over there could communicate in English. Through the email, she/he confirmed my reservation without requiring any advance payment. The departure time was 21:30 and my seat was kept until 19:00.

Not until I set foot on Bursa did I realize that I didn't ask where exactly the terminal bus was. O, oh. I watched people pass by and buses rolling up and down. Those are all city buses. Where should I go??

I saw a sign which through my research I knew was the name of another bus agency. Maybe that's just the sign but who knows they sell tickets from other bus agencies such as Suha Turism. So I went inside the office. The lady's English was close to zero. I showed her my printed email but had no idea at all. Nevertheless, she did her best to meet my need. She called someone over the phone and had me talk to that person. I returned the handset to her, and she seemed to understand what I needed.

However, I felt curious, because the time table and the price she gave me was totally different from what had been discussed with me by email. I tried to confirm that, but she didn't understand me.

"Suha. Ya ya ya Suha." She replied over and over.

I wasn't convinced. I felt bad not to take the seat that had been kindly reserved for me, unless it's inevitable. I imagined that person who replied my email had taken the time and effort corresponding with me in English (which wasn't perfect), just for 2 seats (Bursa - Cappadocia; Denizli - Istanbul) whereas it was a high-season. He/she could have just ignored my email. It would be rude if I neglect that effort by taking another bus.

I stepped out the office frustrated. And then I saw the sign "Pamukkale". I knew also that was another bus agency that served destinations to and from Pamukkale. This agency also, I had emailed, but never replied. Suha Turism had no route for Cappadocia - Pamukkale (Denizli). Thus, until I arrived in Bursa, I only had reserved seats for Bursa - Cappadocia and Denizli - Istanbul.

I entered Pammukale's office expecting someone to be speaking English inside. Or at least, if I write down the name of the place and the date like I had done in China's train stations, the staff would understand me. It should be easier here for Turkish character is much more similar with alphabet.

"Excuse me. I would like to book a ticket for Cappadocia - Denizli for August 30." I gave her my piece of paper.

"Saaad." That was what I heard.

"Saaad." She pointed at the clock on the wall.

This is what I thought she meant. I must return at 'third' o'clock to make the reservation. It was 12 o'clock at that time. So she was about to take a break. Probably Turkish people are like Japanese people who pronounce 'saaad' instead of 'third'. Isn't it said that their grammar are similar? So must be their tongue. Saaaddd!

Ah, why cannot I make the reservation now? I stepped out the office more frustrated.

A young man was standing in front of the office, seeming about to go inside. He looked educated. I looked at him thinking. "Can I plead to make him my interpreter? Just for booking the ticket?"

He was still standing there. Ask him? Ask him not? I contemplated. Yes, ask him. But what if he says no?"

Suddenly the young man turned his back and with quicken steps disappeared from my sight. Opsss. This must be the story of a local getting scared by a foreigner, and not the other way round.

"I have booked a bus ticket for Cappadocia tonight." I laid my printed email on his table. "But I don't know which direction the bus terminal is."

"Yes. I've already reserved a seat. But I don't know where the bus terminal for this bus is."

Mr. Fuat, as was his name, gave me a big smile after he hung up the phone. "Don't worry. Your seat is kept. You just need to go there."

"But, I don't know where the terminal is."

"Oh. You don't know where the terminal is? That's easy." Mr. Fuat mentioned a bus number which I don't remember exactly anymore. It was thirty something. 36 maybe?

"Do you see that man sitting over there?" asked Mr. Fuat as we stood in front of his office. He pointed across the street. I nodded.

Mr. Fuat continued, "Take the bus from there."

"Where should I get off?"

Now I do believe I am no more in China. 'Tourist Information' is written in English, and the information, is, in English.

"Please, have a seat. Would you like some tea?" Mr. Fuat ushered me back into his office and sat behind his desk.

"It's alright. Have a seat, have a seat. How about apple tea?" 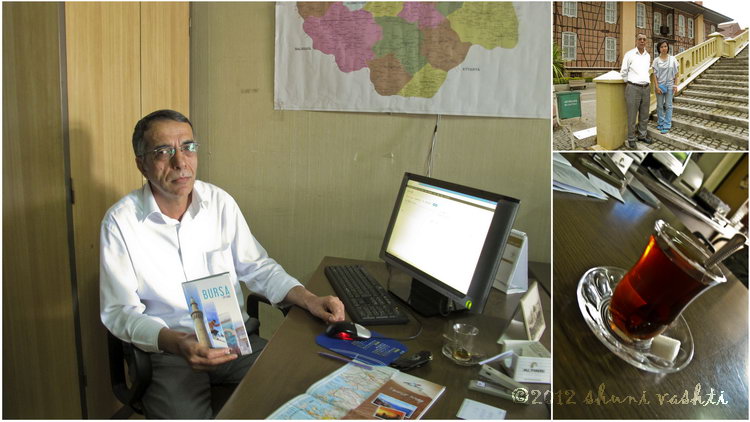 That's my apple tea on bottom right. What a cute tea cup! Mr. Fuat called someone outside his office and a tea-man came in. And yes, that's Mr. Fuat. He gave me a booklet about Bursa with his signature on it, but oh... I left it there. He was too excited to have his picture'S' taken with me. He told me to leave my things in the office. So when I returned to pick them up and leave, I forgot to bring his booklet. The tea-man took our pictures. But the ones right in front of Mr. Fuat's office turned very blurry.

"Where did you say you come from?" Mr. Fuat asked me again.

And then, "There. Which one is Indonesia?"

"And where do you live?"

"No, thank you! But I still have something else to ask you. I hope you don't mind me asking so many things."

"No problem, no problem! What is it?"

"I need to book a ticket for Denizli from Cappadocia...."

Before I finished, Mr. Fuat, "You are going to Pamukkale? Beautiful place!" interrupted.

"Yes, I'm going there. Just now I wanted to book the bus ticket over there, but the staff couldn't understand me. So would you please write down for me in Turkish here, and then I'll show it to her."

"I have tried. But my credit card wasn't accepted. Besides, the office is just over there. You just write down for me, and I'll show the paper to her."

"I know, I know. Just check the internet! Very easy."

"Since I'm here already, I think it's more practical to book my ticket directly."

Ah! I see! Google Translator! That's what Mr. Fuat meant by 'internet'. He selected 'English' on the left and then 'Turkish' on the right. Next, he pushed his keyboard towards me. Oh. He wants me to type my sentence here?

Turkish keyboard layout is rather different from the international US version. I suspect there are more keys. I couldn't type with 10 fingers blindly.

Done. Mr. Fuat's look was like, "So that's what you meant!" He took my piece of paper and copied the Turkish text. But I saw that he didn't merely copy. The words weren't exactly the same. Apparently, as you and I know, Google doesn't translate 100% percent correctly. You have to be the editor.

Back at Pamukkale Bus Agency's office, I showed the staff my piece of paper.

"Saaad." But this time she pointed on a time table list on the counter.

The next day, and then the next day, it suddenly occurred to me that she probably meant 'saat' which is the Turkish word for 'hour' or 'time'. I used to see that word 'saat' on time tables and booking forms, actually. It's similar to the Indonesian word 'saat' which also means 'time'.

Probably when I went to this office the first time, the staff already understood what I needed. She was just asking what time I preferred to take for I only wrote the destination and date on the piece of paper.

Huahahaha!! I laughed loudly at myself. What had I been thinking? Thinking she wanted to take a break, thinking she had a Japanese tongue... Aye!

On bus number 36 (something like that), a young guy give his seat for me. When I wanted to get off at what seemed like a bus terminal, the lady next to me told me it was not yet the otogar for heading to Goreme, where Cappadocia is. Oh, how soothing it is to be surrounded by kind people. 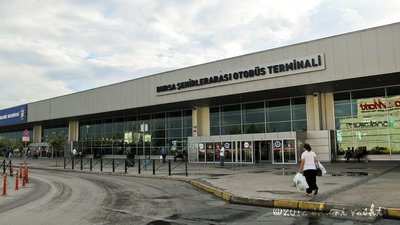 The otogar was actually the last stop. I arrived safe and sound. Wow... is this a bus terminal? To me this looks more like Soekarno Hatta Airport than Pulogadung Bus Terminal that accommodates long distance buses to even across the island e.g. Sumatra. Once again, I dropped my jaws. 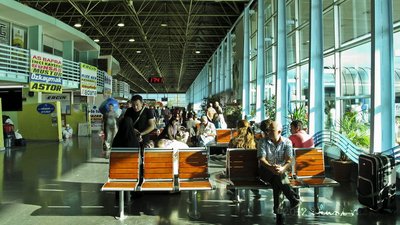 This part of the waiting room. Please be noted, just a very small part of it. In the middle are the bus ticket counters.

Suha, got it. There was only one staff who could speak English. Anyway, there was. At first I was given a ticket with a different seat number. I insisted that according to my email reservation, I got seat number 8, by the window. Finally, done.

There was still much time before departure. So I went out and took some pictures. The cloudy sky had cleared. And as it is in my country, evening sky looks more colorful after a rainfall. It's like a little girl after an evening bath. Fresh and vibrant. (In my home country, we take baths in the evening also, you know.) 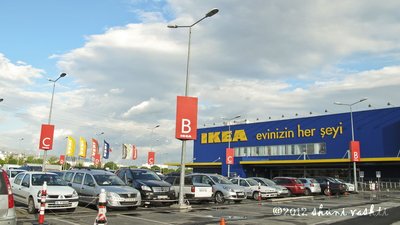 In my mind, I danced up and down because of this. IKEA, IKEA!! 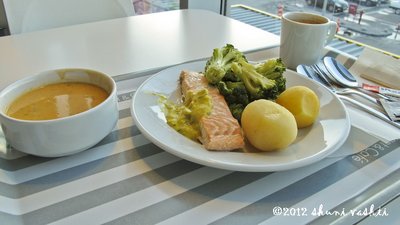 In Turkey I felt hungry every two hours. But this one was the bestest of all. At IKEA Cafeteria. The whole meal cost 18.5 TL. Ah, let's not think of money. Let's feast! Salmon and broccoli and European soup and coffee! Slurp! Delicious and yet healthy food is rare. Most of the time, the more it is to my liking, the more threat it is to health. Isn't that so? 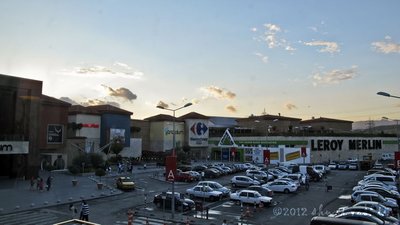 This the view from my table while enjoying every bite and every spoon. 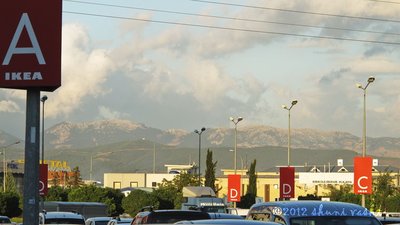 Here's a close up. Beautiful mountains behind. 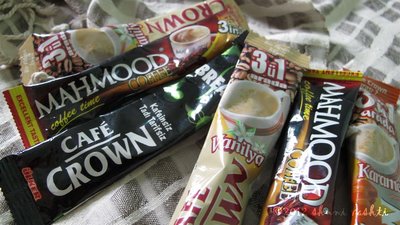 After dinner, I went to Carrefour just to kill the time. It was then that I realized the coffees I purchased in Xinjiang were actually Turkish coffee. The packages were written in Turkish! Oh my. So, along with silk, came coffee.