I walked out the harbor and felt like walking into a movie scene. So European, so movie-like. Until meters away the sea wind was still trying to roll me down the hilly roads. I searched for a bus terminal. Where is it?

With a so-and-so economic background in a wow-and-wow developed country, taking a taxi was no option. I walked back to the harbor hoping to find a tourist information booth -- maybe like in Japan.

But voila! There near the gate of the harbor lined up so many buses! Where had my eyes been just now? Apparently I had been so transfixed by the movie-like houses when I exited the harbor. I had walked straight, straight... to the houses, looking up and down... and my mouth must have been half opened. Oooo... like that.

I joined the people queuing in front of a booth which sign I couldn't understand but believed with all my heart was a bus ticket booth.

Am I not in Bursa already? I thought to myself. Does he not know Koza Han? All travel guides (the ones I had read) mentioned Koza Han. Is that a place popular to foreigners but alien to locals?

I took the front seat so I could stay close to the driver. "Excuse me, Sir. Can you tell me when we arrive at Koza Han?"

Half an hour passed but the driver still said nothing to me. So? I'm not yet in the center of Bursa? Oh well, I came from a harbor. A harbor is always on a sea coast, and a sea coast is never in the center, right?

Suddenly, by the side of a busy road, my bus stopped. The driver turned his head to me. "Bursa Center."

Next logic. Usually everything is available in the center. If I can't get to Koza Han, at least from the center I can get access to the bus terminal for Goreme, my next destination. 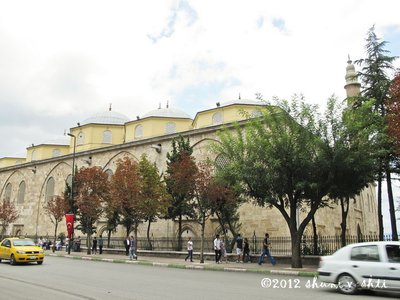 It was raining cats and dogs. Luckily the pedestrian path in front of the shops along the street was perfectly sheltered. I cast my view left and right and across, looking for any sign resembling 'Koza Han'. Nothing. I admired the trees that were about to turn into autumn color. That's cool! I grabbed for G10 and was reminded (again) of a fellow European tourist in Vietnam. She was so excited with a buffalo and wanted to take - many - pictures with that buffalo. That's a pose which never ever occurred in my mind. What?? That's just a buffalo. Same thing now with me. Autumn leaves, autumn leaves! What?? Leaves??

I crossed the street... 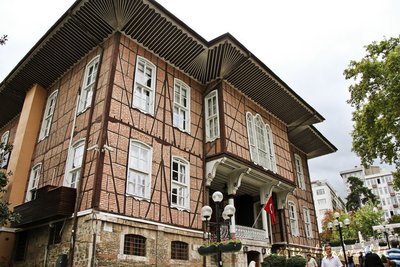 ... to take this picture. This is to me a story-book-like building. I turned round and round. No signs of Koza Han, no signs of silk. I turned the map on "Rough Guide Turkey" clockwise, took a look, and then turned it back anti-clockwise. Wait. Isn't that a mosque? And it says Koza Han is here...? 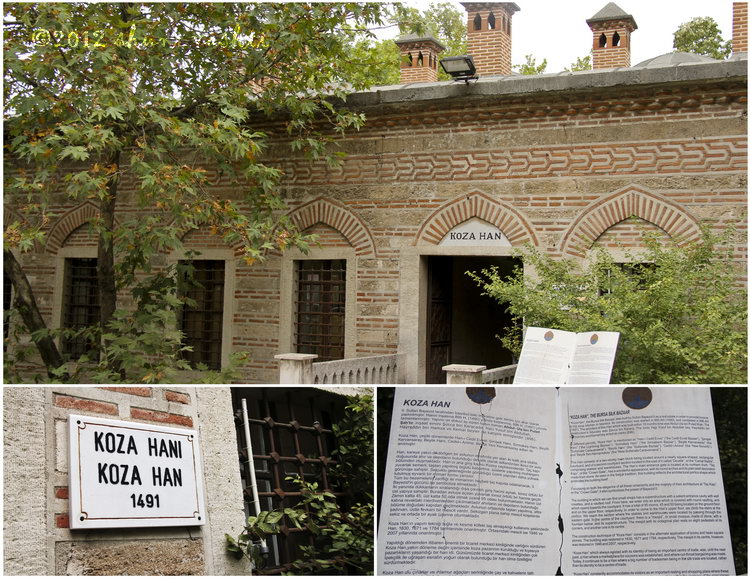 You know what? All the time I had been walking up and down the street right across Koza Han. Koza Han? Yes, Bursa Center!

Would I need more information than this? (I'm copying.)
"KOZA HAN', THE BURSA SILK BAZAAR
"Koza Han", the Burssa Silk Bazaar, was built by Sultan Bayezid II as a real estate in order to provide income to his soup kitchen in Istanbul. its construction was started in 985 AH (1490), and completed in 896 AH (1491). The architect of this Han which was built within 19 months was Abdul-Ula bin Pulad Shah. The construction's fiduciary was Succa bin Karaca. The lords Hajji Yusuf bin Abdullah bey, Hayreddin bin Hamza bey and Kemal bey acted as clerks (896).

This Han consists of a two-storey main block being located around a nearly square-shaped, rectangular courtyard, and of a second courtyard section located to the east of it called "Develik", or the "Camel Stable" comprising stables and warehouses. The han's main entrance gate is located at its northern front. "Tac Kapi", or the "Crown gate", has a wonderful appearance, with its round arches and its plait relief decoration made from stone. As seen in the Seljuk tradition, this building reflects the architectural portico shape which protrudes the building itself.

The building in which we can find small shops has a superstructure with a salient entrance cavity with wall rosettes, and a vaulted roof. From here, we enter into an area which is covered with round vaulting, and which opens towards the courtyard. It has a total of 95 room, 45 and 50 being located on the ground floor and on the upper floor, respectively. ... In the centre of the courtyard, there is a "mesjid", or small mosque, made of stone, with a fountain below, and its superstructure.

"Koza Han" which always existed with its identity of being an important centre of trade, was, until the near past, a Han where marketplace for cocoons was established, and where cut-throat bargaining was made. Today, it continues to be a Han where a big number of tradesmen being in the silk trade are located, rather than its identity to be a centre of trade.

"Koza Han" constantly accommodates its visitors as an important resting and shopping place where these can have a tea or a coffee, together with some sweet conversation within the coolness of the giant planes and the linden trees.

Let me highlight that last paragraph, and come take a look with me. 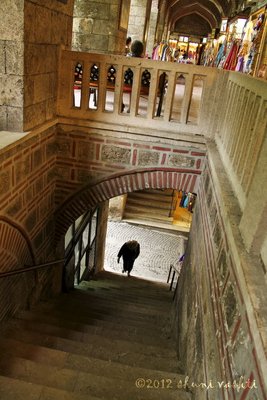 We climb up the stairs... 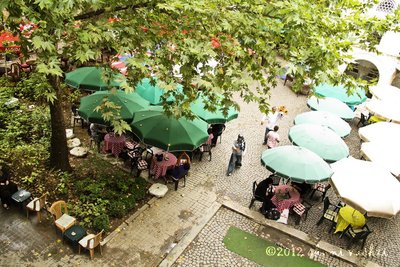 ... and look down. There's the courtyard. 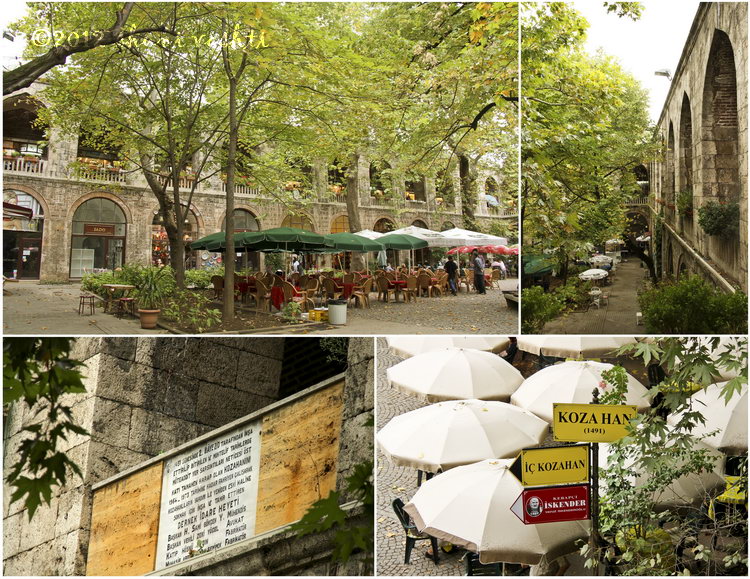 One day, when my economic background has risen a bit higher than so-and-so, I will spend two three or even a week, sitting here the whole day with a book, my laptop, and... 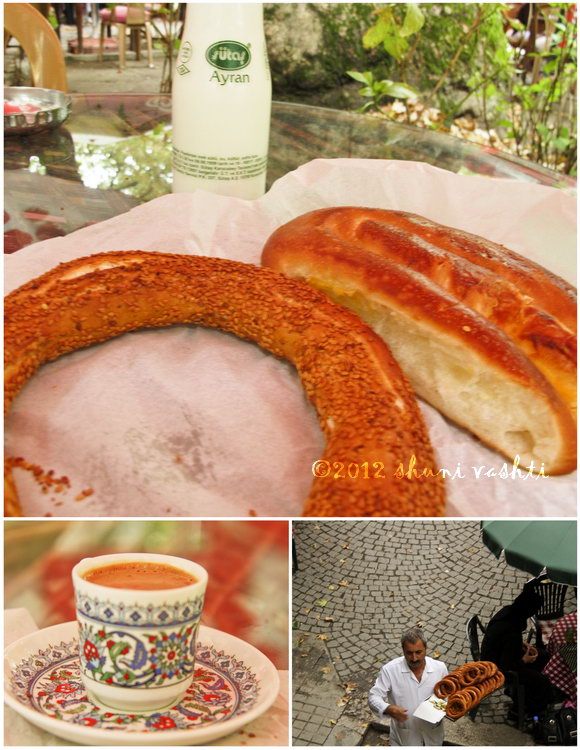 ... this! These, I mean.
For these breads, I only paid one and a half Lyra! Can you I believe that? I didn't. When I gave my money to the man, I was ready to be scolded, because I thought I must have misunderstood his English. Nevertheless, he returned a big and round smile, as round as his bread. "Thank you," he said.

The bread was sooo good! Needless to say, it smelled so European.

I took a seat in front of a cafe. The owners, spoke English pretty well. When you've just come from China, that's like witnessing the eighth wonder of the world.

"May I have some milk or creamer with my coffee, please?" I ordered for Turkish coffee.

"We don't have Turkish coffee milk. But we have Nescafe."

"We can put milk into your coffee, but it would taste much better without milk. We don't drink Turkish coffee with milk."

"But I use to drink coffee with milk."

"I'm just telling you. You can have it with milk, if you want to."

I learned my lesson. It's not just motorbikes that have specifications. Coffee does also. The milk actually ruined the flavor of Turkey inside my coffee.

I regretted for another thing. I didn't take a picture while my coffee was being poured in front of me. They used an Aladdin-like tray and coffee pot. Oh, one day, when my economic background has risen... Yes, one day.