and ice coffee with no ice. 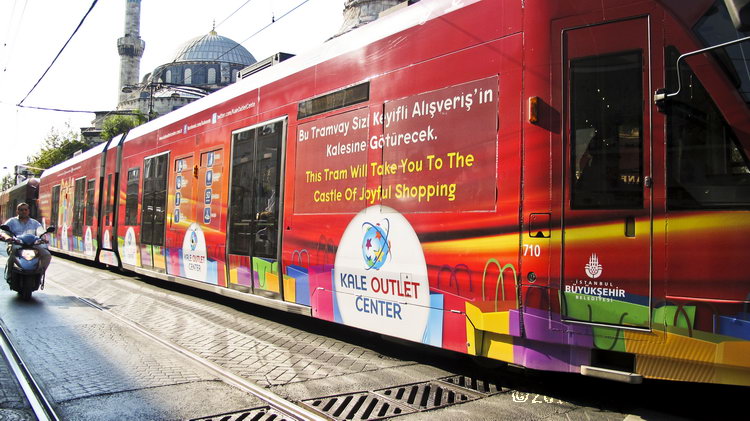 "This castle will take you to the castle of joyful shopping," so is it written on. Let's see!! 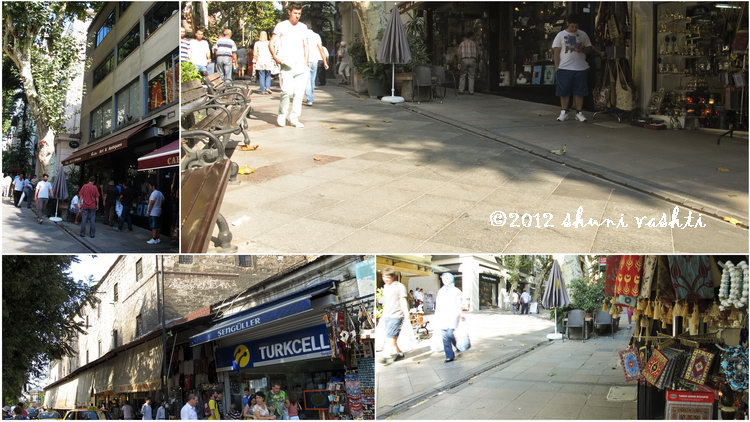 Anyhow, to be honest, I was wondering where was that view in Insight Guides Silk Road, in TLC, and so on. I asked someone where The Grand Bazaar was. He answered, "Here." According to the map in Rough Guides Turkey also, I was already standing in The Grand Bazaar. 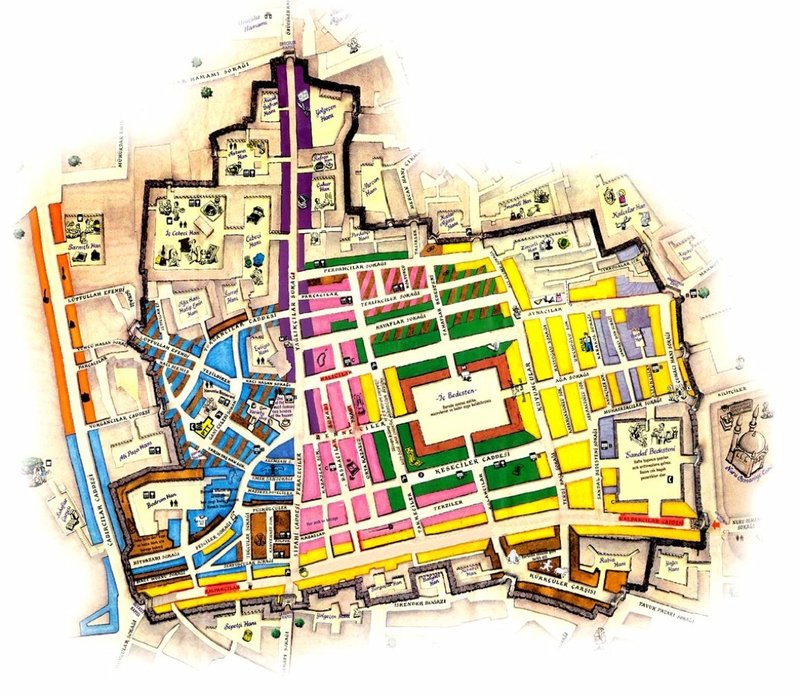 Here's the map of The Grand Bazaar. 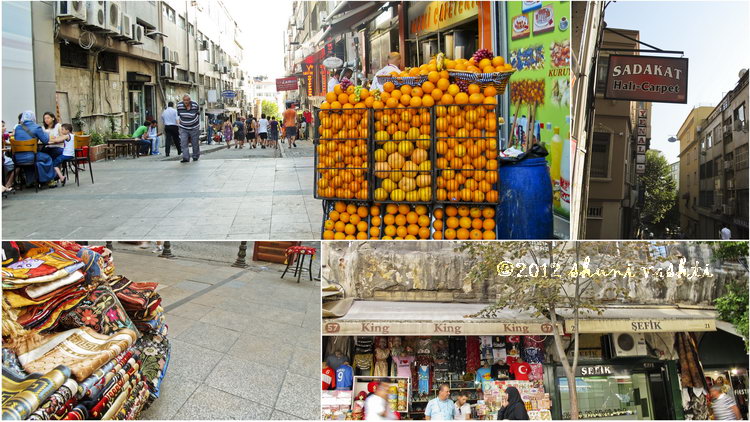 Said the website of The Grand Bazaar again:
It is well known for its jewellery, hand-painted ceramics, carpets, embroideries, spices and antique shops. Many of the stalls in the bazaar are grouped by type of goods, with special areas for leather, gold jewellery and the like. 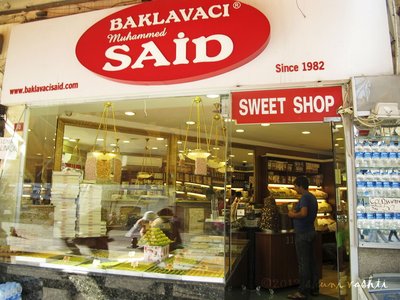 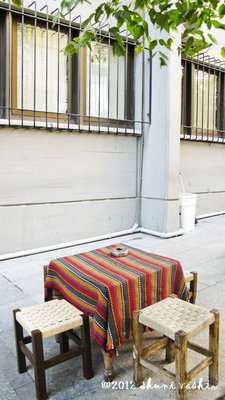 My tummy cried for food again. It's not lunch neither dinner. It's not snacking, either. You'll see. 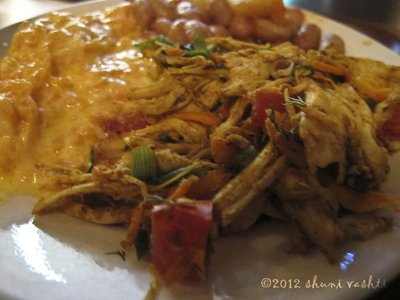 It was a buffet menu. Opting for 3 choices saved more. I don't remember how much was the package of three choices, but this plus coffee was 9 lira. I chose red beans, shredded chicken, something like onion with cheesy paste. 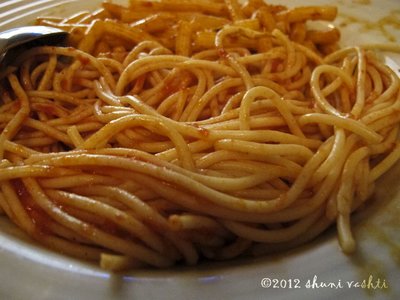 I was so hungry that the big plate of those ingredients above didn't seem enough to fill my stomach. On my right I saw various kinds of pasta. 4 lira. Hmmm, in my home country we have rice. In China, they have noodle. In Turkey, it should be with pasta. A meal is not called a meal without staple food. So did I convinced myself.

Besides, I had already set aside a budget of 15 lira for one meal. That means I still have an allowance of 6 lira.

"I also want that," I told the waiter behind the buffet table.

"Yes, I want this one." I pointed on the pasta noodle like spaghetti.

"Nine lira plus this for lira."

"You only want one kind?"

So I opted for pipe-shaped macaroni with stripes on the side. This has always been my favorite kind of macaroni. I like the feeling of it on my tongue.

Some interesting things happened in this restaurant. First was when I ordered my coffee cold. Apparently the waiter's English was limited to terms of orders only e.g. 'coffee', 'milk', 'sugar', 'hot', 'cold', and numbers.

"Cannot," he answered to me.

"Why? Ice. I want ice coffee." I thought it was weird that they couldn't serve ice coffee whereas I saw 'ice tea' on the menu. Just put the ice for tea into my coffee. What's the matter?

"But you have ice tea. Why can't you give me ice coffee?"

"No ice coffee." I heard again.

Suddenly a young lady standing next to me spoke to the waiter in Turkish. And then he nodded. Oh, is she interpreting for me?

"Are you telling him to give me ice coffee?" I asked her.

"Yes, I told him. He understands now."

"Oh, thank you! It's very hot today and I don't like drinking hot coffee. I was wondering why there's ice tea but no ice coffee. Just put the ice into the coffee."

"So you have told him to put ice into my coffee?"

"Thank you very much. I really appreciate it."

"No problem. My pleasure." She smiled.

After hiking up and down the sixth highest hill of Istanbul, more than for food, my throat was craving for a glass of ice coffee milk. I already could see myself drinking one glass full without stopping for a breath while the ice cubes rattle inside my glass. Slurrrppp!

Here comes the waiter! Tara! What?? Why is it a cup?? Ice coffee in a cup?? There must be so little coffee if the cup contains ice cubes too. But nothing shiny appeared on the surface. So there's no ice. Then where's my ice coffee?? Or is this coffee actually someone else's order?

I held the cup of coffee carefully to my mouth, because I thought it was hot. Ooops! No, this isn't hot coffee. It's not hot at all! But... it isn't cold either! The conclusion? After brewing my coffee, the waiter put ice into my coffee, and then when it became cold a.k.a. not hot, he took the ice out!!

Later on I learned that Turkish don't drink coffee with ice. Asking for ice inside coffee is like asking for rice in exchange of sugar in coffee. You just don't do that. The next thing about coffee I learned was that there are two major kinds of coffee in Turkey which are Turkish coffee and Nescafe. Turkish coffee is not only by default without ice, but also without milk. If you want coffee with milk, say 'Nescafe'.

Nevertheless, my 'hotless' coffee milk was good. And the meal, was extraordinary. Loved it!

I noticed a couple sitting across my table talking about me. They must be. The man turned his face to me as he talked to his spouse. And the his spouse turned her head to me. This happened two three times, whereas there was nobody behind or next to me. Even if they were both cross-eyed, who could they be talking about? Anything wrong with me? Do I look weird? Ah, never mind.

Half way down, I felt my tummy tight. Wow... Mom always say, "Don't order food when you are hungry, because you will order everything." But... when is the best time to order food, then? I stopped chewing, sat back, thinking. Aha! Were those couple talking about the two big plates on my table?

"Look at that Asian lady over there," said the man.

"Which one?" asked his wife.

"That one. That Asian lady. Sitting alone."

"Oh yeah, yeah, with that two big plates in front of her?"

"Exactly! She must have come from a poor country. Even I, wouldn't be able to finish such a huge meal."

Maybe that was how the conversation between them went on. Phew. I called the waiter.

"Excuse me. I want to take the rest away. Can you wrap it for me, please?"

"I cannot bring the rest home? I must finish all here?"

"Wait a minute," the waiter replied. And then he took my plate with him. A few minutes later he returned. I was ready to find my beloved pasta in a 'plastik kresek'. No, I didn't. My beloved pasta was placed neatly inside a styrofoam box. My food wasn't hot at all anyway. That should be fine and even better than a 'plastik kresek' which I assume must be more hazardous than styrofoam. Nope? 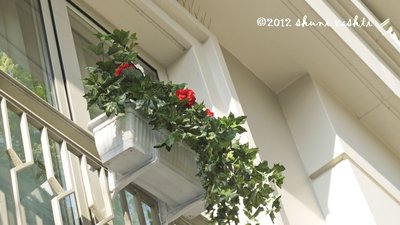 I continued browsing the bazaar a little more and took a couple more pictures.