The Last Evening in Cappadocia

Wow. How exciting traveling is. 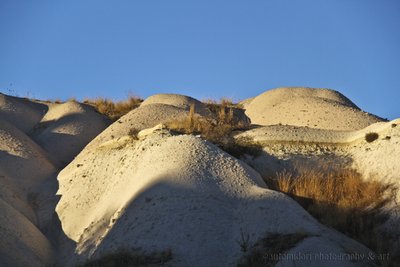 This time I didn't rent a bike, but walked on foot enjoying my last evening in Cappadocia. In Goreme, to be exact. Goreme appears to me a small peaceful town on earth. 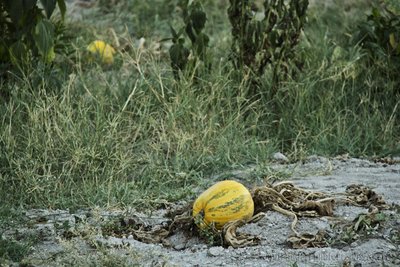 I was surprised to see here what in my home country is called "blewah". I had always thought that blewah doesn't exist on this other part of the world. I consulted Uncle Google. Search "blewah". As usual, Uncle Google brought me to Grand Wiki. Much as expected, the Indonesian version in Wikipedia about blewah mentioned that blewah is a favorite beverage base in Southeast Asia during Ramadhan month. In Southeast Asia. No further place was mentioned. Interestingly, I clicked "English" on the left bar, and I was led to cantaloupe. In Indonesia, cantaloupe is cantaloupe, and blewah is blewah. They are two different fruits.

Still curious, I searched for "Cucumis melo" which is the Latin name for "blewah" according to the Indonesian version of Wikipedia. Now, it becomes Muskmelon. Muskmelon? Well, it doesn't look like this fruit lying on the ground of Goreme, not to mention "blewah" in Indonesia. Blewah's skin is silky smooth, not netty like muskmelon or any other melon. Nevertheless, muskmelon looks closer to blewah than cantaloupe does. Muskmelon is native to Persia (Iran), Anatolia, Armenia, and adjacent areas on the west and the east which is believed to be their center of origin and development,.. declares Grand Wiki. Anatolia? Yes! I'm standing on it!! On the very center of it! 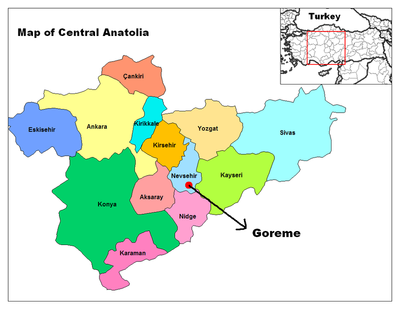 Wow. How exciting traveling is. 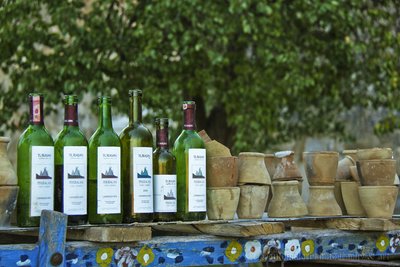 These empty wine bottles and broken clay pots were laid on a cart by the side of the road for uncertain purpose. These clay pots are undoubtedly the ones used to cook Turkish kebab. In my home country, these -- left unguarded -- will disappear in no time. 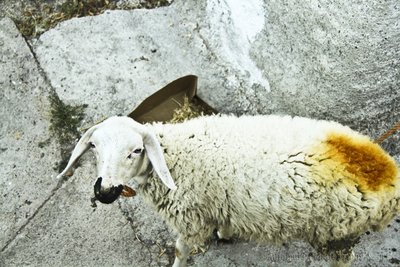 I felt sorry for this sheep. It looked lonely. If only I could speak sheep language, I would tell him about his fellows in China. I would show him my photos of China, the biggest home to sheep in the world. 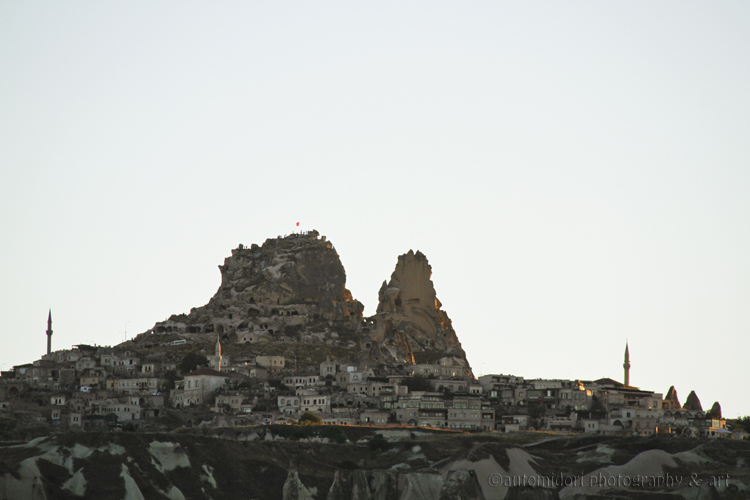 Back on the highest rooftop of Kemal's Guesthouse I stood. Cappadocia is glowing to the glow of sunset. 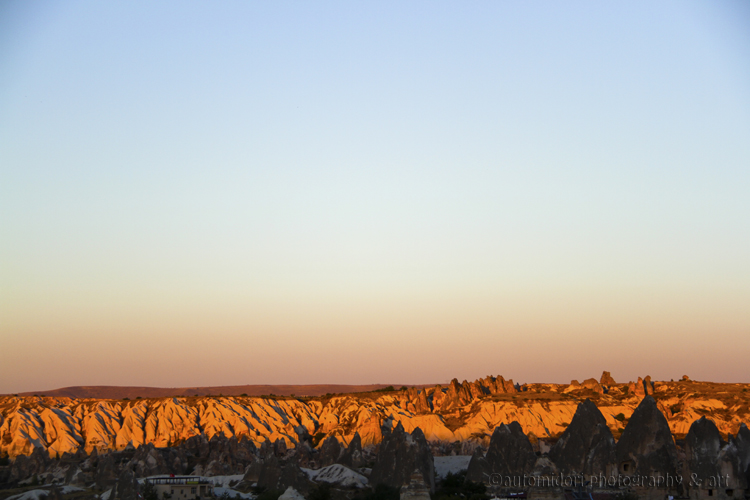 With a three-hundred-and-sixty-degree view of Cappadocia, I felt like the world was mine. Aha. 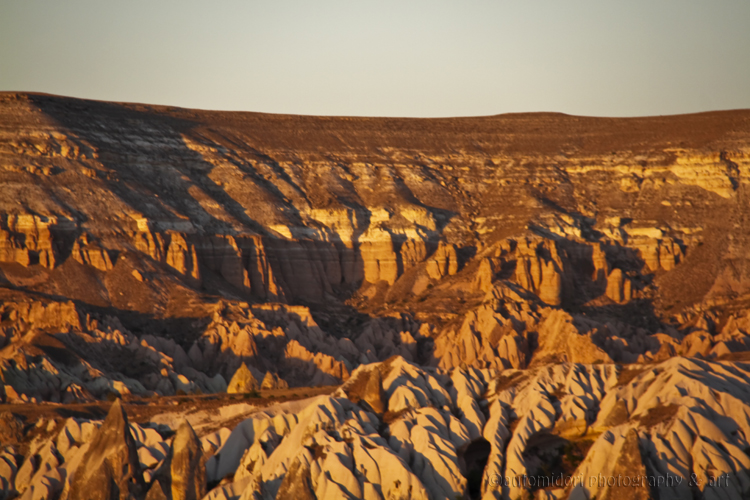 I'm looking forward to deep winter when the evening glows on a blanket of snow over the rocks of tuff. 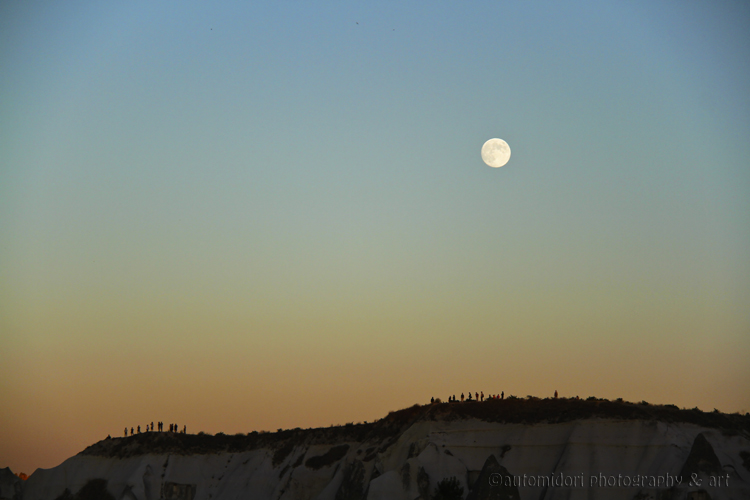 The same way as I had experienced sunrise, I expected to delight myself with sunset this time. Unfortunately, the sun wasn't in favor for me that evening. But... the moon was! A full moon! Do you see that little creatures on the rock edge? Those are people shooting for sunset. 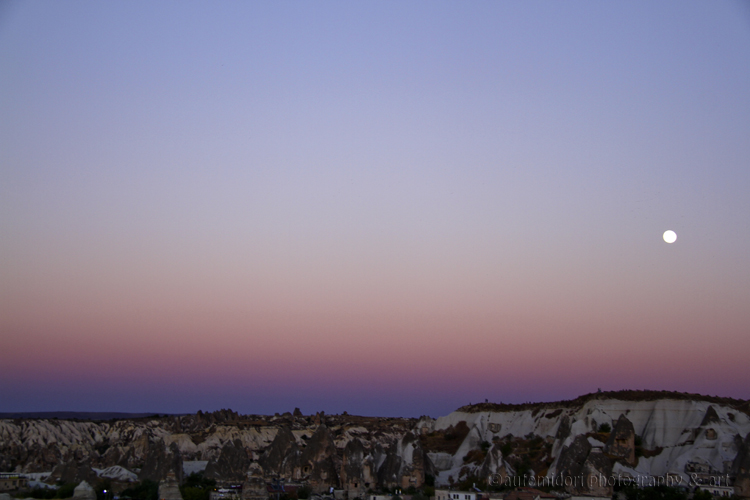 Sunset twilight and a full moon together. That was first experience ever. 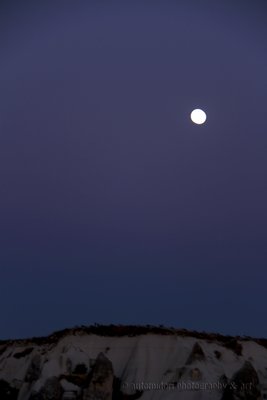 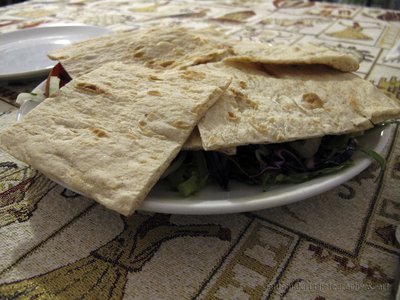 This is another kind of kebab. Let's see what's beneath. 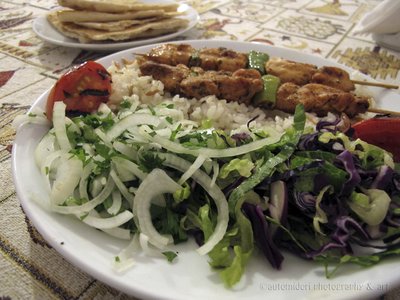 Tara! As all Turkish food has been, so was this dish to me: delish.