Sunset Twilight with A Stranger

"Good for you. You are lucky." 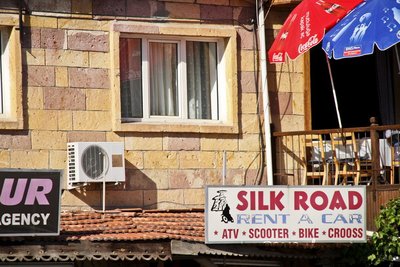 Bike rent!! Yippee!! What can be better than renting a bike from Silk Road on a Silk Road adventure?

The owner's English was perfect. All the bikes he had were tall ones, but he said he had another one which is usually ridden by his 14 year old daughter. He asked me to wait. He already tried to adjust one of the bikes, but still it was too high for me. Being aware that the roads in Goreme were hilly, I decided to play safe with myself. Being adventurous doesn't mean ignore one's limit.

While waiting for his daughter's bike, we had a warm chat.

"Yes, Indonesia." I answered him for the second time.

It turned out I was his first Indonesian guest. I was only half surprise.

"It's fine. My daughter is as tall as you," he tried to assure me when the bike arrived. My feet still couldn't touch the ground when I sat on the saddle.

"I'm afraid I might loose balance when I stop and then fall down," I explained. "I had a slight accident once."

"You do it like this." He sat on the saddle, pressed the brake, and then jumped off the saddle.

I was not convinced. I apologized sincerely for not being able to take his bike whereas he already made so much effort for me. He smiled back. "No problem." Oh how I wished I could take the bike.

I walked around the road and then found another similar shop. Besides renting vehicles, this shop also sold tour packages. Same thing, there were no short bikes. But the owner told me to wait, because there will be a Korean guest returning soon and the bike she was using was the small one. We made a deal for 5 lira per 2 hours rent.

While I hardly could wait for my bike to come, the owner whom I have forgotten the name, invited me to come inside and have tea with him. By then I already understood that tea in Turkey is a welcome drink, and it's free.

He went inside to a small kitchen behind a curtain. I could see him fixing tea. Then he came out with two petite glasses of tea, exactly like the one I had in Bursa, and in other places. It looks like this glass has become Turkey's national standard to serve tea.

Then came the standard questions. What's your name? Where do you come from?

"From Indonesia to China along the Silk Road, and then flew to Istanbul, back on the Silk Road." It was an answer simply to create a wow impression, honestly.

"Wow!" He did say that. "Indonesia! Bali! I'm planning to go there with my sister. How would you suggest me to fly to Bali? What is the cheapest way? What flight are you taking back to Jakarta?" And so on, and so forth, until my petite glass of apple tea turned empty.

He considered my return flight from Istanbul to Jakarta with Malaysia Airlines cheap. The price he once checked was double mine. "How could you know?"

"And then from Jakarta how can I fly to Bali?"

"Air Asia!" He said he wanted something cheap, didn't he?

To make a long story a bit shorter, he offered to take me on his motorbike to a spot where I could take pictures of sunset. Sunset! Wow! Nothing can double the excitement of my travel like those two words: 'Sunrise' and 'sunset'.

"How much would you ask for that trip?" I asked.

"Yeah, yeah. If you'd like to. If not, it's okay. It's just because you said you like to take pictures. "

"I would like to, really! But I don't want to waste your time and gas."

Fast forward again. He wanted me to pay his kindness by teaching him how to book a ticket on Air Asia. Well, that's one of the things I do best. Here was the plan: I take my bike ride, and then watch sunset with him. After dinner, I return to his office to teach him the Air Asia thing.

I had a fun bike ride, but tiring. My feet could easily reach the ground, but the distance between the steering wheel and the saddle seemed a bit too far. Ah... that's it when a lilliputian travels the giant fairy's land. 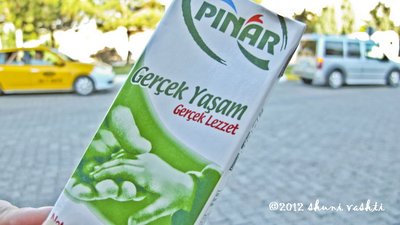 I stopped by a store to buy drink. 'Lezzet'! That sounds like 'lezat' in Indonesian which means 'delicious'. Wow! So where did the Indonesian word 'lezat' come from?

Inside the store there was a long row of sacks of all kinds of nuts. Xinjiang returned to mind. 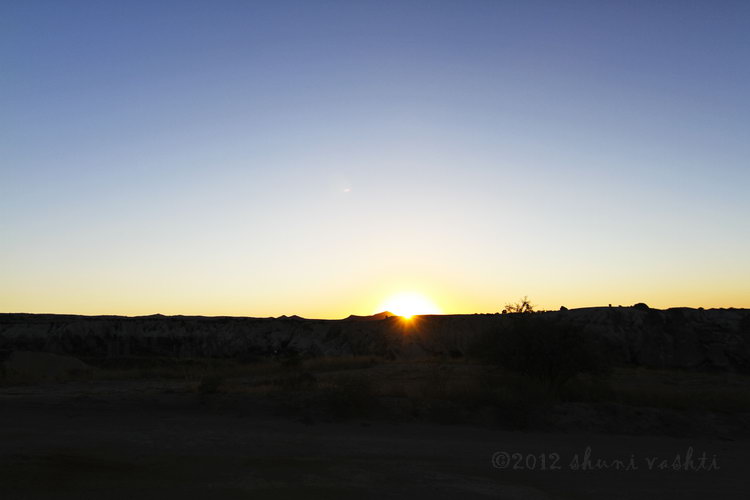 The road up to here was at times steep, but not half as scary as my motorbike ride in Ujung Genteng several years ago. 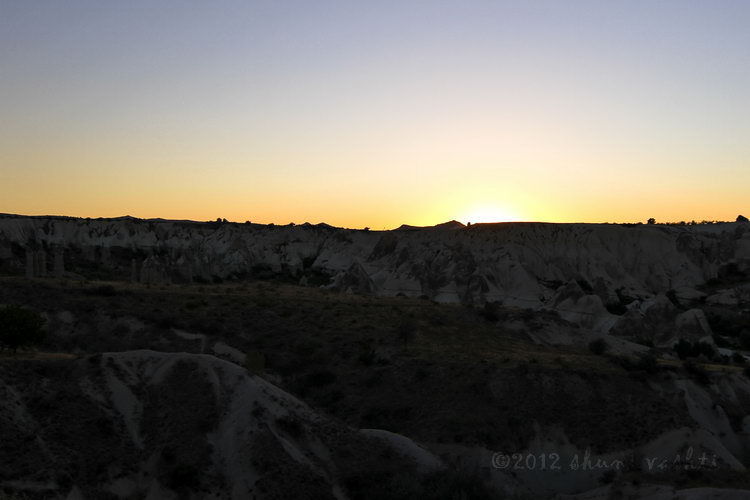 Actually on the way up here, I spotted a much better stunning scene with the rocks protruding like a forest. I wanted to ask him to bring me back to that spot, but had not the courage since I was enjoying a favor. Besides, that place just now was rather narrow. Maybe it would be difficult for him to park his motorbike. On this spot, there was a spacious empty ground facing the valley. Spacious enough to park his sport motorbike, for me to lay down my camera backpack and arrange my lenses while spreading everything on the ground. Spacious enough for one tent, I guess. 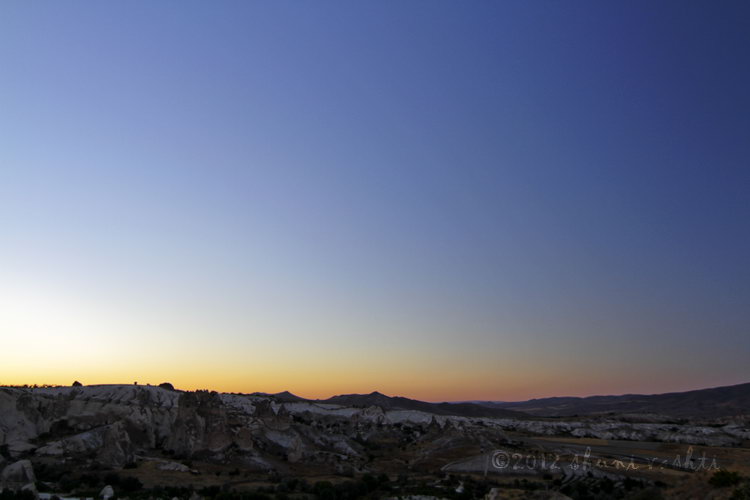 We stayed until twilight.

If sun in Turkey sets down in the West also, this must be East. The opposite direction was actually more magnificent.

There are many trekking paths around Cappadocia. When I told Barbara that my tour during the day had been great except for the lack of time to take pictures, she suggested me to go trekking.

"But won't that be tiresome and after all would only cover two three places?"

"No. You spend like a week here. And then you go to two three places each day. The places actually aren't very far apart"

"How much does a car plus driver rent for one day cost?"

"That will be very expensive, because gasoline is expensive here."

That became the time I decided that I would return to Cappadocia. 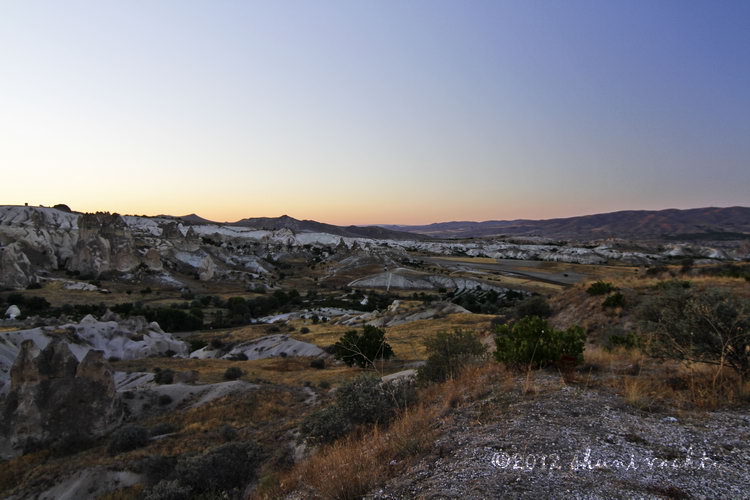 I haven't told you that Cappadocia means 'land of beautiful horses'. Oddly enough, I met not a single horse. I did see one sheep, though, during my bike ride. However, for a landscape like this, it's no wonder horses become beautiful companion. 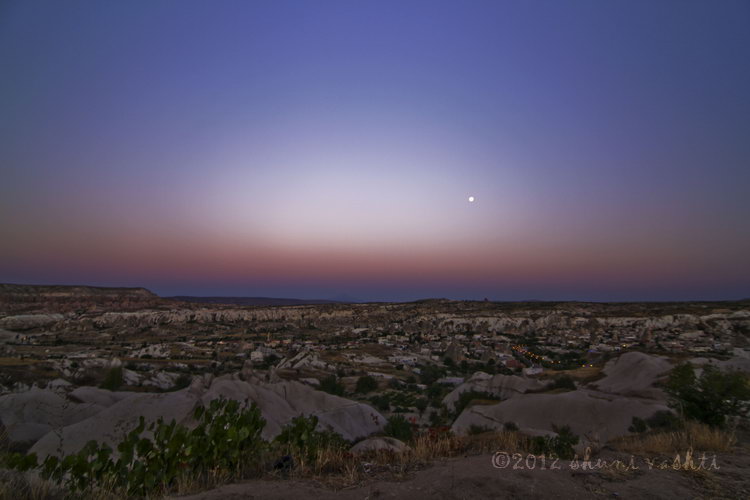 "Barbara! I met Mister 'so-and-so'. He said he knew you and Kemal. He even knew Kemal isn't in town." Like a little girl returning home telling her mom about school, I was excited telling Barbara about my splendid day.

"This is such a small town. We know each other here."

Now my mind flew to "Little House on the Prairie" where everyone knew everyone, where news spread faster than Yahoo. Barbara's next words turned that picture vivid.

"Mister so-and-so is a married man. I'd suggest you to stay out from him."

I immediately felt chilling goosebumps. On the way back after sunset, this man had offered to take me for another ride to view Cappadocia's night-scape. I refused, because I didn't want to take too much from him.

"You are afraid of me, aren't you?" That was his respond and he did seem not happy by my refusal.

"Errr... but I've already promised to help him book a ticket on Air Asia," I said to Barbara. "Do you think I should better not return to his office?"

"I'm not telling you that. You just make sure you don't go just the two of you or stay in a quiet place where there's nobody else."

Barbara furthermore, "Nothing is for free." How I wanted to shout, "Amen!"

"There are only two things a man would want from a woman. Either sex or money," Barbara continued. "Let's face it, nowadays, what can't we find through the internet? Let him find a ticket to Bali just the way we meet now. If he isn't after your money, then he might be interested in you. But, he is married."

After dinner, I walked along the road in dismay. "Lord, lead me and guide me, please." I had not the heart to not return to Mister so-and-so's office, because I thought, what if he had been sincere bringing me to watch sunset? After all, both Barbara and him are human. I would then be cheating this man by not keeping my promise. It would be like taking something from him without paying. That's certainly beyond my dignity. May God protect me and make him not at his office by the time I arrive there. By that, I would have a reason.

My prayer was answered. His office was empty!

But as I turned away at the corner, I heard the most fearsome thing. "Hey! Heyyy! Madam!" Hands clapping.

I turned my head. "Oh! Wait a minute. I need to by drink first." So I walked to the shop across the road and bought a bottle of mineral water.

"Why did you go away?" he required, as I returned to his office.

"No, no. I need water for tomorrow. So before I forget, I thought I better buy one first." That was not a hundred percent lie. I did needed a bottle of mineral water for next day's trip.

This man led me to another office across the road. He said it was his friend's office which computer could be used. It was sort of a travel agency office. There was nobody there. But the place was broad and surrounded by full glass walls. Right opposite the glass wall was a garden restaurant by the side of the road. Location speaking, I judged the place safe. If he does anything nasty to me here, anyone would possibly notice.

He said behind the desk and turned on the computer. I stood beside him and waited, nervously. Sweat began to wet my shoulder.

"There. What next? Sit down, please!" He stood up and pulled the chair for me.

"I'm very sure that's the right address for Air Asia. Besides, even Yahoo cannot appear," I explained.

He typed this and that, but the page in front of us didn't change.

"Maybe the modem is off," I suggested.

And then I noticed the internet icon on bottom right of the monitor had a red cross over it. "Look! Doesn't this mean that there's no internet connection?"

"That's impossible," he answered. He continued typing something, but in vain.

"Maybe you can ask your friend to connect the internet," I suggested again.

In the end, this man gave up, and let me go. Two third of me rejoiced, one third of me felt sorry for him. "You just remember that address. That's the address for Air Asia. Their website is in English," I told him.

"Barbara!" I ran into the living room, once again like a little girl looking for her mom and couldn't wait to tell her something. "You know what, the internet didn't work!!"

"Good for you. You are lucky."