Back on the Track in Cappadocia

Cappadocia Part THREE of Many

If there was anything I could wish for in Cappadocia, it was a companion. But, with a certain requirement, which is... uhm, no! Which are, capable of paying attention to every word of the tour guide's information and then putting them accurately on a note, while I do the photographing. That's all? No. I said, 'which are'. Next, capable of paying his/her own fee, room, transportation, meal, etc., etc. You call that a companion or assistant? I didn't say 'assistant' because I don't want to pay the salary. Aye.

Hah! The thing I always hate in joining a tour is the lack of chance to absorb myself into the world around. How I hate to hear: "I give you ten minutes, and we meet again at this point."

Now, the other me is talking: "So! You prefer a tour that spends a whole day but only takes you to two three destinations, leaving you 2 hours at each on your own?"

"Certainly not! That would be a waste of money!"

"Then what do you want?"

"I want to be rich! Rich enough to afford one week -- the least -- in Cappadocia, pay a private tour guide, and hire an assistant!"

"You better continue walking and stop dreaming. What time did Bilal say you have to be back down there?" 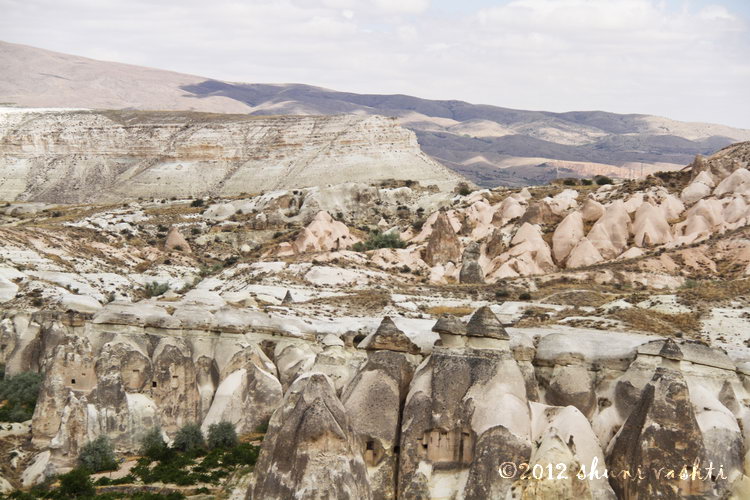 Cavusan Village is a cave village. Hmmm, I thought the name 'Cavusan' had a connection with the word 'cave'. In these rocks, people build their homes. Do you see those tiny holes? They look tiny, because this photo was taken from a wide distance. 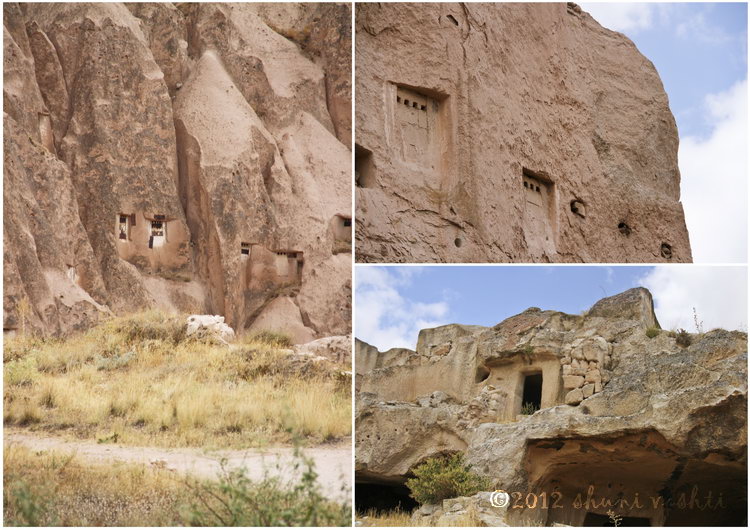 Do you see them better? 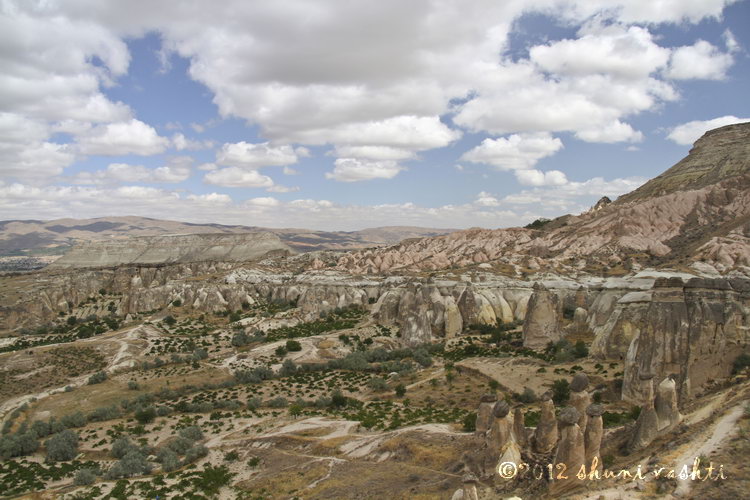 Quoting from Insight Guides: Turkey, again:
Though the white dust from the rocks looks like sand, it is actually much more fertile than the soil of the surrounding central Anatolian steppes. Trees, vines and vegetable grow with ease, a fact which meant that there were always plenty of farmers here. The first of them quickly discovered that the stone of the rock valleys is as magical as it looks, for it is soft until cut into and brought in contact with the air, making it a perfect medium for carving entire buildings out of the rock.

Generations of local people have utilized this unique conditions to hollow out innumerable chambers in the rocks over an area of several hundred square kilometers. Some provided homes for the farmers, others acted as dovecotes or stables. Many were use as chapels, cells and refectories for monks and hermits. And today, people still live in the cave houses, which are wonderfully cool in summer and warm(ish) in winter. 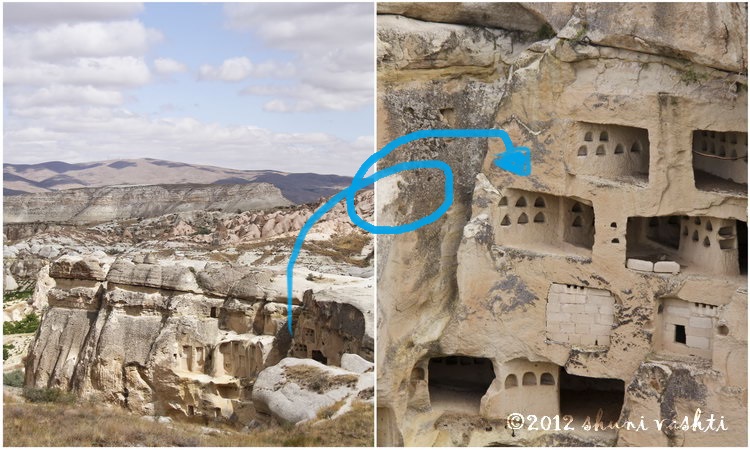 You know what, Cappadocia was also home to pigeons. They, too, made caves their home. Were made to by humans, I mean. In the ancient time, pigeon eggs were used to paint frescoes. Their droppings were made use as fertilizers. The pigeons themselves were best messengers of the time. 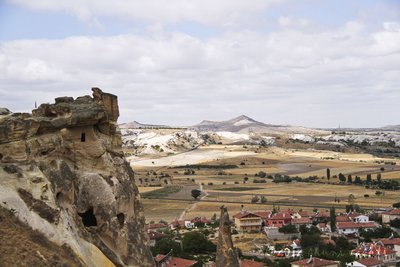 I'm looking down at Rose Valley. 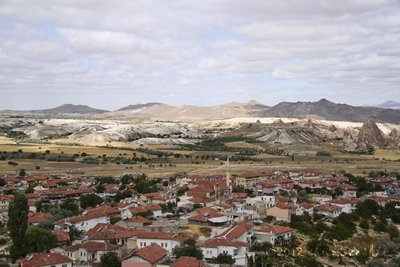 Rose Valley got its name from the red roofs.... oopss! 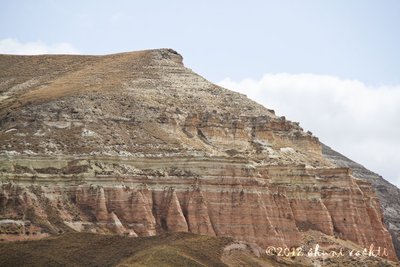 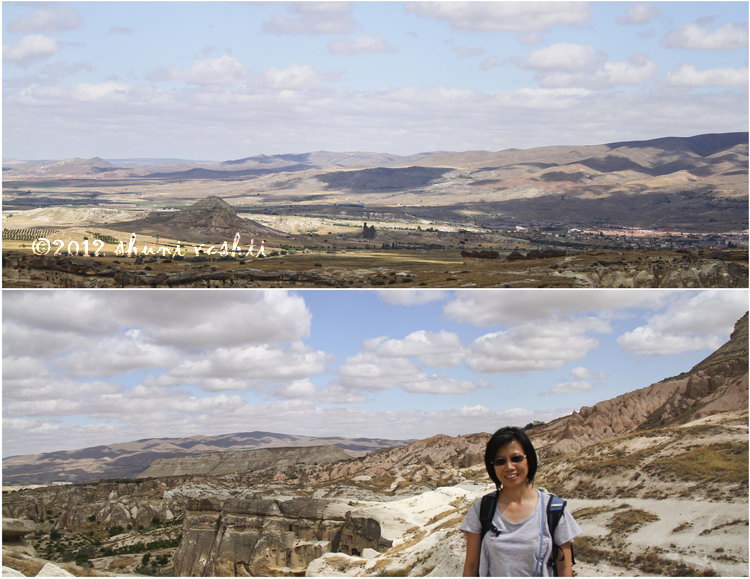 On my way back to the meeting point, a young couple (not from my group) asked me to take their picture. Seeing that they were bringing an SLR camera, I seized the opportunity to make them pay me back, and they happily did. Tara! Got it. Not bad this time. Aye, I forgot to tell you. I want to be rich enough that I can afford also, a personal photographer.

I walked down the track, and... voila! Everyone but me, was already in the car! Oh, bother.